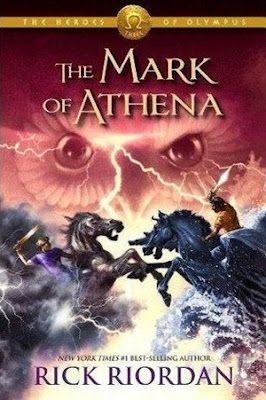 Annabeth is terrified. Just when she's about to be reunited with Percy—after six months of being apart, thanks to Hera—it looks like Camp Jupiter is preparing for war. As Annabeth and her friends Jason, Piper, and Leo fly in on the Argo II, she can’t blame the Roman demigods for thinking the ship is a Greek weapon. With its steaming bronze dragon masthead, Leo's fantastical creation doesn't appear friendly. Annabeth hopes that the sight of their praetor Jason on deck will reassure the Romans that the visitors from Camp Half-Blood are coming in peace.

And that's only one of her worries. In her pocket Annabeth carries a gift from her mother that came with an unnerving demand: Follow the Mark of Athena. Avenge me. Annabeth already feels weighed down by the prophecy that will send seven demigods on a quest to find—and close—the Doors of Death. What more does Athena want from her?

Annabeth's biggest fear, though, is that Percy might have changed. What if he's now attached to Roman ways? Does he still need his old friends? As the daughter of the goddess of war and wisdom, Annabeth knows she was born to be a leader, but never again does she want to be without Seaweed Brain by her side.

Narrated by four different demigods, The Mark of Athena is an unforgettable journey across land and sea to Rome, where important discoveries, surprising sacrifices, and unspeakable horrors await. Climb aboard the Argo II, if you dare....

OH MY LANTA. THAT WAS FANTASTIC. THERE WERE SO MANY THINGS THAT HAPPENED IN THIS BOOK THAT I CAN'T EVEN THINK STRAIGHT.

This book was exciting and addicting, which I expected from Rick. It was so nice to finally see Annabeth and Percy reunite. I absolutely adore them together, and my shipper heart was exploding with happiness to see them together again. Of course, a lot of bad things happen to them, but I always have faith that Percy and Annabeth will make it through.I also really liked reuniting with the other characters as well. It was so nice to see all seven of the demigods finally come together in this book. The standout character in this book was definitely Annabeth. Annabeth has always been an awesome character, but she somehow became even more badass in this book. I have never admired a character more than I admire her. Rick filled this book with action and twists that made it impossible for me to put down this book. I seriously could not stop reading because each chapter completely captivated me. The quests in this book made me so anxious. I was constantly worried about the characters, especially Annabeth. There was no way I was putting this book down until I knew what the outcome of the quests were.AND THEN THE ENDING HAPPENED AND I DIED. I COULD NOT BELIEVE THE ENDING. I WANTED TO SCREAM. THANK GOODNESS I ALREADY HAVE HOUSE OF HADES BECAUSE THAT ENDING WAS NOT COOL RICK.

Email ThisBlogThis!Share to TwitterShare to FacebookShare to Pinterest
Labels: Review Review, Rick Riordan, The Heroes of Olympus, The Mark of Athena