THIS IS WHERE IT ENDS by Marieke Nijkamp 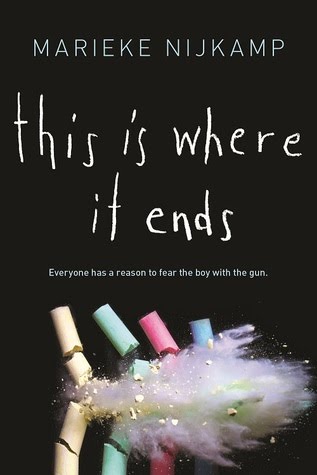 Title: This is Where it Ends
Author: Marieke Nijkamp
Release Date: January 5, 2016
Goodreads

10:00 a.m.
The principal of Opportunity, Alabama's high school finishes her speech, welcoming the entire student body to a new semester and encouraging them to excel and achieve.
10:02 a.m.
The students get up to leave the auditorium for their next class.
10:03
The auditorium doors won't open.
10:05
Someone starts shooting.
Told from four perspectives over the span of 54 harrowing minutes, terror reigns as one student's calculated revenge turns into the ultimate game of survival.

This Is Where It Ends by Marieke Nijkamp is a difficult novel to review.  It's the story of a school shooting told through the point of view of main characters (high school students).  The characters describe the shooting from the beginning to the end, 54 minutes of horrific chaos.

I don’t feel like I can call this book powerful.  It is, however, tragic.  I am not sure I understood the purpose of this book.  There were definite themes that ran through the novel such as report your suspicions, abuse leads to abuse, and there will always be heroes in times of darkness but I don’t feel like these themes were developed because of the limited timeframe of the novel.

I could not connect to the characters at all either.  I don’t feel like I got a chance to really meet them in this novel and was disappointed about that.  They lacked depth and again I think it was because of the timeframe in which the story was told.  There were flashbacks to further develop the characters but it wasn’t enough for me.

Finally, I did not feel that there was any closure (hence the title?).  The novel just didn’t hit the mark for me.