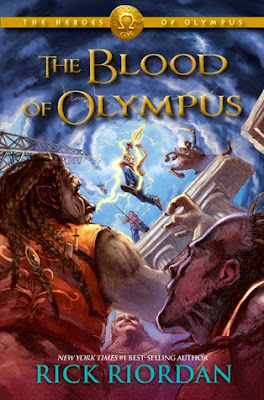 Though the Greek and Roman crewmembers of the Argo II have made progress in their many quests, they still seem no closer to defeating the earth mother, Gaea. Her giants have risen—all of them—and they're stronger than ever. They must be stopped before the Feast of Spes, when Gaea plans to have two demigods sacrificed in Athens. She needs their blood—the blood of Olympus—in order to wake.The demigods are having more frequent visions of a terrible battle at Camp Half-Blood. The Roman legion from Camp Jupiter, led by Octavian, is almost within striking distance. Though it is tempting to take the Athena Parthenos to Athens to use as a secret weapon, the friends know that the huge statue belongs back on Long Island, where it "might" be able to stop a war between the two camps.The Athena Parthenos will go west; the Argo II will go east. The gods, still suffering from multiple personality disorder, are useless. How can a handful of young demigods hope to persevere against Gaea's army of powerful giants? As dangerous as it is to head to Athens, they have no other option. They have sacrificed too much already. And if Gaea wakes, it is game over.

Obviously I had to read this book right after I finished House of Hades. I needed to know how this was going to wrap up. As a whole, I really liked this book! There were somethings that I didn't like, but I was pretty happy with this book. One of my biggest issues with this book was the POV selections. I wish would could have seen from all seven of the demigods (the ones from the prophecy). I think I would have felt more satisfied with this being the last book in the series if we got to read from all of their perspectives. I liked seeing Reyna's POV, because it was really cool to learn more about her. However, I would have given up her POV in a heartbeat to read the POV of Hazel, Frank, Percy, or Annabeth one last time. ESPECIALLY ANNABETH OR PERCY. I just felt like something was missing from this book because we didn't get to read from the POV of those four characters. They almost felt like side characters instead of main characters in this book. However, I absolutely loved reading from Nico's POV. That was a great addition to the POVS. I have always had a soft spot for Nico, and this book made me love him even more. I really enjoyed learning more about him and seeing him grow as a character. By the end of the book, I was shipping him so hard with a certain character (which I won't name because of spoilers). I think most people ship Nico with that person now. I really hope to see development of that relationship in a future series. *cough* Trials of Apollo *cough*

The action in this book was not lacking! Rick always manages to write heart stopping action in his books. The two big battles in this book were EPIC. I loved those scenes! They were probably some of my favorite parts of this book.I was happy with the place that all of the characters were at by the end of this book (OMG MY BABY LEO). I would have liked to have read a chapter from each character at the end of this book. I think that would have made this book feel more complete. I am hoping to have some of my questions answered in Rick's new series that is coming out in 2016. I am so sad to part with these characters. I grew attached to every character in this series. LEO, NICO, PERCY, ANNABETH, PIPER, HAZEL, FRANK, JASON, AND REYNA. I WANT MORE OF THEM. I WANT MORE BOOKS WITH THEM. I DON'T WANT TO EVER LEAVE THEM. I think the hardest characters to say goodbye to are Percy and Annabeth. We have been through so much with them. I don't want to leave them. This is just too hard.

Overall, I enjoyed this book. I didn't exactly wrap up the series like I wanted to, but it was still a good book! NOW GIVE ME THE TRIALS OF APOLLO *grabby hands*4 / 5 Fangs
Posted by MissDaemon at 8:30 AM

Email ThisBlogThis!Share to TwitterShare to FacebookShare to Pinterest
Labels: Review Review, Rick Riordan, The Blood of Olympus, The Heroes of Olympus