The Prophecy of Shadows (Elementals #1)
by Michelle Madow 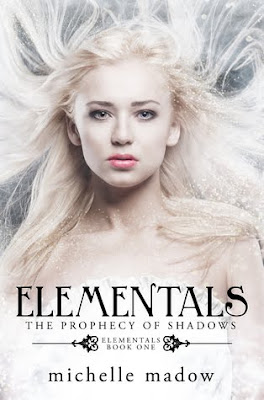 Filled with magic, thrilling adventure, and sweet romance, Elementals is the first in a new series that fans of Percy Jackson and The Secret Circle will love! When Nicole Cassidy moves from sunny Georgia to gloomy New England, the last thing she expects is to learn that her homeroom is a cover for a secret coven of witches. Even more surprisingly … she’s apparently a witch herself. Despite doubts about her newfound abilities, Nicole is welcomed into this ancient circle of witches and is bedazzled by their powers—and, to her dismay, by Blake—the school’s notorious bad-boy.Girls who get close to Blake wind up hurt. His girlfriend Danielle will do anything to keep them away, even if she must resort to using dark magic. But the chemistry between Blake and Nicole is undeniable, and despite wanting to protect Nicole from Danielle’s wrath, he finds it impossible to keep his distance.When the Olympian Comet shoots through the sky for the first time in three thousand years, Nicole, Blake, Danielle, and two others in their homeroom are gifted with mysterious powers. But the comet has another effect—it opens the portal to the prison world that has contained the Titans for centuries. After an ancient monster escapes and attacks Nicole and Blake, it’s up to them and the others to follow the clues from a cryptic prophecy so that they can save their town … and possibly the world.

As soon as I read that this book had Greek Mythology, I knew I had to read it. I really loved the mythology aspect of this book, but I didn't love this book as a whole. I enjoyed this book, but it didn't really grab me as much as I was hoping it would.I thought Michelle Madow's writing in this book was very good. Her writing flowed well, and I thought she did a good job with keeping the book exciting. I also thought the plot was very interesting. I loved learning about the magic and mythology. That was actually my favorite part about the book. I wish there would have been more of that in the book. One thing I didn't like about the magic and mythology was the way it was introduced. It felt too easy and sudden. I would have like to discover the magic in a different way.When it comes to the characters, my favorite characters were actually two of the side characters, Kate and Chris. I thought Kate was adorable and I loved how smart she was. Chris was hilarious and he always put a smile on my face. I really hope Chris and Kate become a couple in the next book.

All of the other characters were kind of just bland. Nicole was a strong girl, but I really couldn't connect with her. Blake didn't really do anything for me. However, Danielle's character was the worst. She was the stereotypical "bitch" character, which drove me insane. I wish the author would have done something more creative with her character.The romance between Blake and Nicole was very boring in my opinion. I didn't understand Nicole's desire to be with Blake. Right away she was drawn to him and couldn't stop thinking about him. I thought their romance was kind of ridiculous and I really didn't care about it.
I am hoping their romance will be better developed in the next book.Those things aside, I still enjoyed this book. I thought this book was fun and I read it very quickly. I really liked the plot and I would be interested in seeing what would happen next. 3 / 5 Fangs*This ebook was given to me in exchange for a honest review. *
Posted by MissDaemon at 8:30 AM