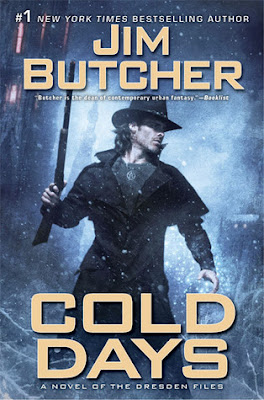 After being murdered by a mystery assailant, navigating his way through the realm between life and death, and being brought back to the mortal world, Harry realizes that maybe death wasn’t all that bad. Because he is no longer Harry Dresden, Chicago’s only professional wizard.


Of course, it won’t be an ordinary, everyday assassination. Mab wants her newest minion to pull off the impossible: kill an immortal. No problem there, right? And to make matters worse, there exists a growing threat to an unfathomable source of magic that could land Harry in the sort of trouble that will make death look like a holiday.


Beset by enemies new and old, Harry must gather his friends and allies, prevent the annihilation of countless innocents, and find a way out of his eternal subservience before his newfound powers claim the only thing he has left to call his own…

Amazing!!!  That's the only word to describe this book. So many plot twists that my head was spinning. Finally, we're able to get a little more information on the evil that has been ongoing since Storm Front.  Although, don't think that by any means all the questions have been answered because they haven't.

The book begins with Harry starting physical therapy or the idea of PT by Mab. Mab wants her shiny new Winter Knight up and around and enforcing her will.  After weeks of getting stronger, Harry is introduced to the Winter Court and of course, everyone is trying to kill him. There are rules and Harry has to learn them fast or not bother planning the next day. The first job Mab gives Harry, is not an easy one. It is almost impossible. Thankfully, Bob has a vital piece of information to help him. Harry will need help from all his friends in this fight against time.

Cold Days is an action-packed story. There is no downtime as I have come to expect from prior Dresden books.  Harry has to deal with the Winter Knight's mantle and his desires. If he lets his guard down he can be as bad as Mab. And I know Mab is supposed to be this evil queen but I like her. More so now that I know what her true job is.  By the end of the story, a couple of shocking scenes ensued. I'm not sure what the repercussions are going to be. I can only imaging.

One thing that bothers me is that Harry still hasn't had any contact with Maggie. I wish he would let go of his fears and deal with his parenthood. The girl needs a father and as much as I like the Carpenters, it is not the same. The other reason is because I love Mouse and he needs more page time.

In regards to Harry's love life, I'm still a Molly supporter. Poor girl has loved him for years.

“How busy are you today?"

"After that," I asked, "would you like to help me save the city? If you don't already have plans."

He snorted. "You mean, would I like to follow you around, wondering what the hell is going on because you won't tell me everything, then get in a fight with something that is going to leave me in intensive care?"