Percy Jackson and the Olympians #3 & #4
by Rick Riordan 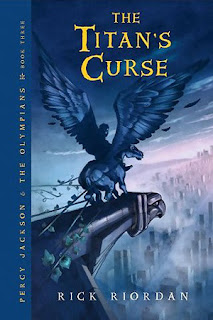 IT'S NOT EVERYDAY YOU FIND YOURSELF IN COMBAT WITH A HALF-LION, HALF-HUMAN.

But when you're the son of a Greek god, it happens. And now my friend Annabeth is missing, a goddess is in chains and only five half-blood heroes can join the quest to defeat the doomsday monster.

Oh, and guess what? The Oracle has predicted that not all of us will survive...

Another fun and exciting addition to this series! I really enjoyed meeting some new characters, especially Nico. Nico was adorable and I just wanted to hug him forever. One of my favorite characters was missing almost the entire book, which I think was the reason I didn't enjoy this one as much as I enjoyed the others. Overall, I liked this book a lot! That ending left me so excited to just jump into book 4!

SPOILERS FOR BOOK 4 ARE BELOW

TURN BACK NOW IF YOU HAVEN'T READ
BOOK 4

The Battle of the Labyrinth
Book 4 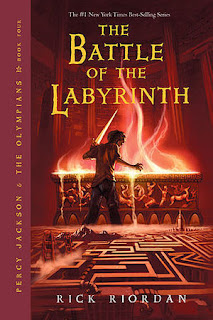 Percy Jackson isn't expecting freshman orientation to be any fun. But when a mysterious mortal acquaintance appears on campus, followed by demon cheerleaders, things quickly move from bad to worse.In this fourth installment of the blockbuster series, time is running out as war between the Olympians and the evil Titan lord Kronos draws near. Even the safe haven of Camp Half-Blood grows more vulnerable by the minute as Kronos's army prepares to invade its once impenetrable borders. To stop the invasion, Percy and his demigod friends must set out on a quest through the Labyrinth - a sprawling underground world with stunning surprises at every turn.

This book was SO good. SO, SO, SO GOOD. I could not stop reading this book. I AM IN LOVE WITH THIS BOOK AND THIS SERIES.
AND NOW...ONTO THE FINAL BOOK...

Email ThisBlogThis!Share to TwitterShare to FacebookShare to Pinterest
Labels: Review Percy Jackson and the Olympians, Reviews, Rick Riordan, The Battle of the Labyrinth, Titan's Curse