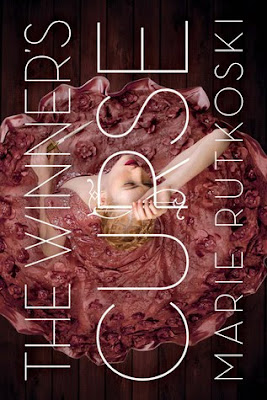 Winning what you want may cost you everything you love... As a general’s daughter in a vast empire that revels in war and enslaves those it conquers, seventeen-year-old Kestrel has two choices: she can join the military or get married. But Kestrel has other intentions. One day, she is startled to find a kindred spirit in a young slave up for auction. Arin’s eyes seem to defy everything and everyone. Following her instinct, Kestrel buys him—with unexpected consequences. It’s not long before she has to hide her growing love for Arin. But he, too, has a secret, and Kestrel quickly learns that the price she paid for a fellow human is much higher than she ever could have imagined. Set in a richly imagined new world, The Winner’s Curse by Marie Rutkoski is a story of deadly games where everything is at stake, and the gamble is whether you will keep your head or lose your heart.

I have heard so many great things about this book, and I am so glad that I finally got around to reading it. I am glad that the hype for this book did ruin my enjoyment of it. Marie Rutkoski's writing was just exquisite in this book. The world building was rich and detailed. The characters were well developed and I connected to them in different ways. I loved Arin and Kestrel so much. I ship them so hard. Their romance was written so beautifully and it was perfectly paced. They made my heart swell so much that it actually hurt.

Even though there was romance in this book, there was more to the plot than just romance. There was deceit, strategy, war, trust, and friendship. I loved the way Marie explored the dynamics between the slaves and the ruling people. I thought it was so interesting to read about, especially because the ruling people were considered "barbaric" compared to the people they conquered. This book was filled with twists and turns that constantly left me on the edge of my seat. I know book two is out, so I will have to get my hands on it as soon as possible.