Double Down by Gabra Zackman 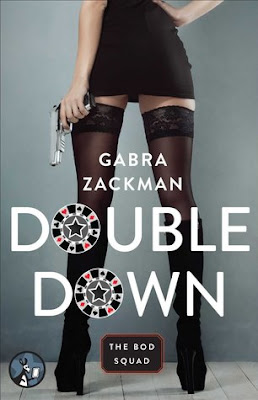 Who would fall for an assassin…except another assassin?

After a security breach is written in the sky—literally—the Bod Squad jumps back into action. An important member of the team has been assassinated by the mob, and the squad’s public enemy #1, Baba Samka, is getting too close. Could his deadly work be an inside job? Only trained assassins Tyka and Mahmoud have the very particular set of skills the Bod Squad needs to solve this case. Neither of these dead sexy shooters is looking for a partner—but before they know it, the sparks are flying faster than bullets. Could true love be in their sights?

This is the third installment in the Bod Squad series. I do believe it's a much better reading experience if you read the books in order.

If you are following the series you know that the Bod Squad was after white collar criminals but because of different events and revelations, there is a much bigger fish to catch.

The first couple who started the series is still trying to get married in between all the new incredible events. Also, two assassins who are part of the team are realizing that they care more for each other that just a hook-up.

I enjoyed Tyla and Mahmoud. They are both strong characters and watching them fall for each other was a great plot development.

This book, as the books prior, is full of action and plot twists.

I hope we get another book in the series!


A complimentary copy was provided by the publisher in exchange for an honest review.
Posted by MrsLeif at 9:30 AM