Bookishly Ever After (Ever After #1)
by Isabel Bandeira 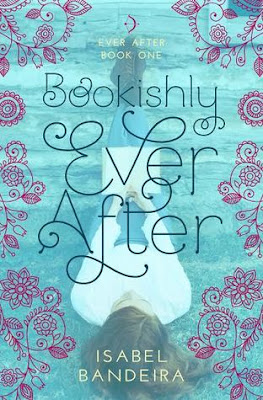 In a perfect world, sixteen-year-old Phoebe Martins’ life would be a book. Preferably a YA novel with magic and a hot paranormal love interest. Unfortunately, her life probably wouldn’t even qualify for a quiet contemporary. But when Phoebe finds out that Dev, the hottest guy in the clarinet section, might actually have a crush on her, she turns to her favorite books for advice. Phoebe overhauls her personality to become as awesome as her favorite heroines and win Dev’s heart. But if her plan fails, can she go back to her happy world of fictional boys after falling for the real thing?

I wanted to absolutely love this book. Everything about this book screamed perfection to me. Unfortunately, I ended up having mixed feelings about this book. It was as adorable and relatable as I thought it would be, but I definitely had some issues with it.

One thing I liked a lot about this book was the main character, Phoebe. Phoebe was so nerdy and bookish that I found myself relating to her A LOT. I liked how the author really showed how much Phoebe adored books. Phoebe was a little annoying at times, but I really liked her as a whole!


Dev was a great character too. He was simply adorable. I want my own Dev! I loved how open he was to Phoebe's book obsession. He never judged for her it. It was so cute to see that. I thought he was the perfect boy for Phoebe. The flirting between Dev and Phoebe was too precious.

I really liked Dev and Phoebe together, but the actual process of Dev and Phoebe getting together got a little boring. I am all about a slow burning relationship, but this one felt too slow. I think it felt slow because the main plot of the book was the romance. I understood that Phoebe was shy, but I would have liked to have seen more development of their relationship. I did eat up their flirting though. It was so cute, but I think the book should have been shorter for the type of romance that this book had.

I thought including snippets of the books Phoebe was reading was a fun idea in the beginning of the book. However, I was kind of bored with them by the end of the book. I think the book excerpts would have been more enjoyable if they were shorter.


I also wasn't really a fan of the cliche makeover in this book. Dev obviously liked her before she had the makeover, so it almost made me roll my eyes when Phoebe got a makeover.


Overall, this was a cute and fun read. Even though I didn't love this book as much as I wanted to, I still enjoyed it. I loved Dev and Phoebe as characters. Their relationship was adorable, even though it got a little boring at times. If you want a quick and adorable read, then I would recommend picking this book up!