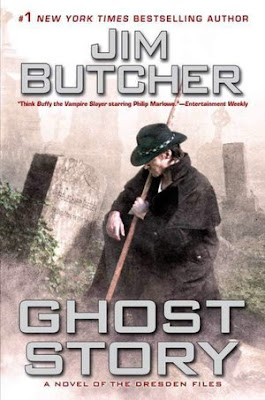 The eagerly awaited new novel in the #1 New York Timesbestselling Dresden Files series.
When we last left the mighty wizard detective Harry Dresden, he wasn't doing well. In fact, he had been murdered by an unknown assassin.
But being dead doesn't stop him when his friends are in danger. Except now he has nobody, and no magic to help him. And there are also several dark spirits roaming the Chicago shadows who owe Harry some payback of their own.
To save his friends-and his own soul-Harry will have to pull off the ultimate trick without any magic...

I hope you are up to date on this series before you read my review....

As followers of the Dresden series, you might know how Changes ended. Shocking to say the least.  Poor Harry has lost almost everything including his life. But, he is not all gone. Six months after getting shot, he has a chance to come back to Chicago and help his friends defeat new evils while finding out who murdered him.  However, even as a ghost things are not easy for this wizard.

I found myself getting frustrated with Ghost Story. Why? Because I wanted Harry in the middle of things, participating to the max instead of just staying on the sidelines. One of the last scenes when Molly is in danger and Harry could do nothing, upset me to no end.  Also, I felt like this one had a much slower pace than I'm used to in the Dresdenverse.

Things that I liked: Harry's first time seeing Mister and, later on, Mouse. I liked how much Molly has evolved and matured. She is becoming one of my favorite characters in the series. Mortimer plays a huge part in this novel and I'm glad he was there to help Harry.

As new characters go, Fitz was a plus. With his abilities, he could be a great addition to Harry's army of friends.

“Lies. Mab cannot change who you are.”