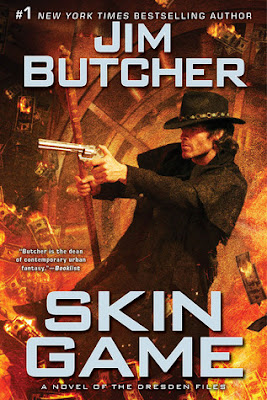 Harry Dresden, Chicago’s only professional wizard, is about to have a very bad day….

Because as Winter Knight to the Queen of Air and Darkness, Harry never knows what scheming Mab might want him to do. Usually, it’s something awful.


It’s a smash-and-grab job to recover the literal Holy Grail from the vaults of the greatest treasure hoard in the supernatural world—which belongs to the one and only Hades, Lord of the freaking Underworld and generally unpleasant character. Worse, Dresden suspects that there is another game afoot that no one is talking about. And he’s dead certain that Nicodemus has no intention of allowing any of his crew to survive the experience. Especially Harry.


Dresden’s always been tricky, but he’s going to have to up his backstabbing game to survive this mess—assuming his own allies don’t end up killing him before his enemies get the chance…

This series can't get any better!

Jim Butcher has created an epic world with unforgettable characters. I loved all of Harry's friends and allies.

This time, Mab is making Harry join a known enemy, Nicodemus Archleone. Harry must be part of the team to go in search of the Holy Grail. This item is in Hade's vault. Yes, Hades, the Lord of the Underworld. Harry knows this is not going to be an easy feat to achieve. Harry asks Murphy to join him watching his back.  Of course, Harry knows Nicodemus will betray him once the item it's in his hands.

Besides Harry and Murphy, Nicodemus has hired a few more baddies to help him.  Anna Valmont is back as the vault expert. Binder is part of the team despite Harry telling him never to come back to Chicago. We have 3 new characters: Hannah Ascher, the Genoskwa (nasty thing) and Goodman Grey (which I really liked).

This book has such an awesome plot with incredible twists. I can't complain about anything except the lack of Thomas, Molly and very little Mouse.

I wish there is more of Harry and Maggie as a family with Mister and Mouse on Peace Talks.
Also, I might be in the minority but I still want Dresden with Molly.