The Lost Hero (The Heroes of Olympus #1)
by Rick Riordan 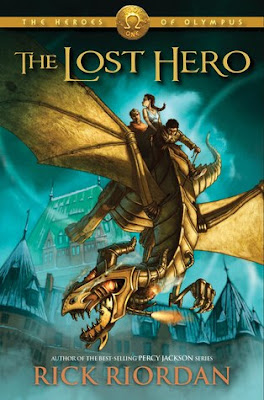 Jason has a problem.
He doesn’t remember anything before waking up in a bus full of kids on a field trip. Apparently he has a girlfriend named Piper, and a best friend named Leo. They’re all students at a boarding school for “bad kids.” What did Jason do to end up here? And where is here, exactly?

Piper has a secret.
Her father has been missing for three days, ever since she had that terrifying nightmare about his being in trouble. Piper doesn’t understand her dream, or why her boyfriend suddenly doesn’t recognize her. When a freak storm hits during the school trip, unleashing strange creatures and whisking her, Jason, and Leo away to someplace called Camp Half-Blood, she has a feeling she’s going to find out.

Leo has a way with tools.
When he sees his cabin at Camp Half-Blood, filled with power tools and machine parts, he feels right at home. But there’s weird stuff, too—like the curse everyone keeps talking about, and some camper who;s gone missing. Weirdest of all, his bunkmates insist that each of them—including Leo—is related to a god. Does this have anything to do with Jason's amnesia, or the fact that Leo keeps seeing ghosts?

Wow. Okay, I was not expecting some of things to happen......dang. That was a great book.

This book didn't have a lot of Percy, which was really disappointing. However, I found myself becoming really attached to the new set of characters that were introduced in this book. I liked that each character had their own unique personality and skill set that really added to the group. My only issue with the new characters was that I wish they would have stopped keeping secrets from each other!

I was worried that not having Percy in this book was going to ruin my enjoyment of the book, and I am glad it didn't. I definitely missed Percy, but I have a feeling we will see him in future books! My favorite character in this book was Leo, by far. I thought Leo was adorable, funny, loyal, and just a great addition to this series.

I thought the plot was addictive and compelling as all of the other books from the original Percy Jackson series. Rick did a great job of weaving in humor and heart into a suspenseful and action packed book. He presented the information about the Greek and Roman mythology in such an interesting and fun way. His writing never disappoints me.

Email ThisBlogThis!Share to TwitterShare to FacebookShare to Pinterest
Labels: Review Review, Rick Riordan, The Heroes of Olympus, The Lost Hero