Where Lightning Strikes by A.L. Jackson 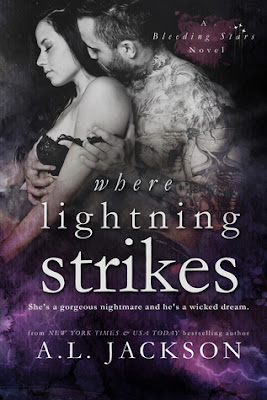 Do you know what it feels like right before lightning strikes? How you can feel the current running through your veins? The trembles of warning that ripple through the air? It was a thrill Tamar King chased all her life until it became the very thing she had to escape.

For the last four years, Tamar King has hidden herself in an isolated world she created. She was safe. No one could touch her. Until Lyrik West walked through her door.
He’s the lead guitarist for Sunder and everything she can never have. The dark and beautiful rock star becomes everything she craves.
Lyrik’s life has been devoted to his band and that success has cost him. Bitter, hard, and filled with regret, he refuses to lose himself again, but from the moment he sees her, he wants one night with Tamar King.
The gorgeous bartender is more than he bargained for. Their attraction is consuming. Their desire overpowering. With one touch, they ignite.
But is it worth the cost of getting burned?
She’s a gorgeous nightmare and he’s a wicked dream…

A.L. Jackson is the New York Times bestselling author of contemporary and new adult romance.
She first found a love for writing during her days as a young mother and college student. She filled the journals she carried with short stories and poems used as an emotional outlet for the difficulties and joys she found in day-to-day life. Years later, she shared a short story she’d been working on with her two closest friends and, with their encouragement, this story became her first full length novel. A.L. now spends her days writing in Southern Arizona where she lives with her husband and three children. Connect with A.L. Jackson online:www.aljacksonauthor.com   To stay up to date with important news on A.L. Jackson, including new releases, sales, and exclusive specials and excerpts, text “jackson” to 96000 to subscribe!