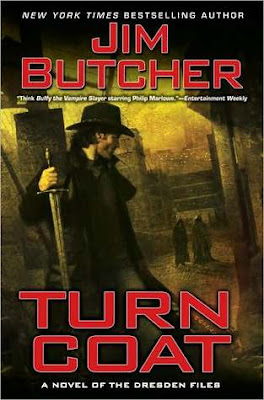 When it comes to the magical ruling body known as the White Council, Harry keeps his nose clean and his head down. For years, the Council has held a death mark over Harry's head. He's still thought of as a black sheep by some and as a sacrificial lamb by others. But none regard him with more suspicion and disdain than Morgan, a veteran Warden with a grudge against anyone who bends the rules.

So when Morgan turns up asking for help, Harry isn't exactly eager to leap into action. Morgan has been accused of treason against the White Council, and there's only one final punishment for that crime. He's on the run, he wants his name cleared, and he needs someone with a knack for backing the underdog.

Now Harry must uncover a traitor within the Council, keep a less than agreeable Morgan under wraps, and avoid coming under scrutiny himself. And a single mistake may cost someone his head.

Harry is faced with a traitor in the White Council and a fight against time. He has help from his friends including Mouse, Molly, Karrin, Ebenezer, Thomas, Butters and the werewolves. He also has new and old enemies gunning for him.  Someone in the White Court of Vampires is helping the enemy. A new character Binder, an assassin, is in town to capture or kill Morgan. Harry needs to invoke a sanctum invocation and makes the spirit on the island his ally. He names the Island Demonreach. In the end, a fight ensues with the White Court Vamps, Council members, Harry's friends and the Naaglossi. The outcome of some of the characters was too painful to read.

This book was awesome in adding the details to the long arc. As far as the short one, it was very intriguing and fast-paced. I was devastated when Mouse got hurt and then my heart broke for Thomas. I sure hated the Naagloshii and Madeline Raith. I'm glad Lara was helping Harry on this one. I'm not sure by the end of the series if Lara will remain an ally or a foe. Time will tell.

This was the first Dresden book that made me sad after I was done reading it. It just tells you how good of a writer Jim Butcher is that he made me feel this way.