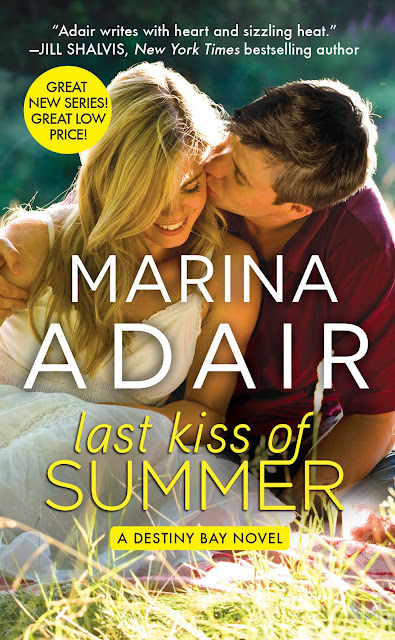 
Kennedy Sinclair never dreamed she'd own a pie shop and an orchard in a small town like Destiny Bay. But nestled between the mountains and the Pacific Ocean, it's the perfect place to cross something off her "Life's short so eat the icing first" list and start her life over from scratch. Her shop, Sweetie Pies, is famous for its hot, flaky apple turnovers and sinfully delicious deep dish pie. For Kennedy though, nothing is more enticing than the tall, strapping slice of temptation who keeps coming back for more.


Luke Callahan is determined to make his hard cider business a success. With his beloved father's cider recipe and the opportunity of a lifetime in his grasp, he'll stop at nothing to get this deal done. There's just one catch: he needs Kennedy's apples. At first, he thinks it'll be as easy as pie to charm those apples right off her trees. But Kennedy isn't falling for his tender charms or his wicked ways. When the negotiations start heating up, so do the feelings they have for each other. And it takes just one kiss to seal the deal . . 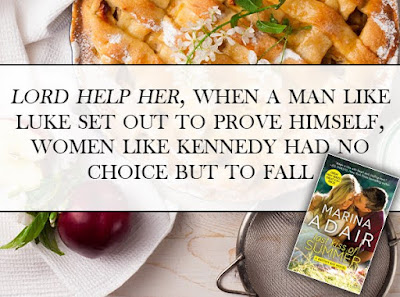 I'm always in the mood to read a Marina Adair novel. They are sweet and fun romances!

Last Kiss of Summer is the first book in her new series. The MC is Luke Callahan and Kennedy Sinclair.

Kennedy is in need of a new start after she finds out her boyfriend of four years, Philip, is cheating with their dance instructor. Kennedy leaves him and goes home to her grandmother, the person who was there while her mother was living her life with a different man each time. Her grandmother reminds her of the dreams she had as a young girl and tells her that a friend Fi is ready to sell her bakery in Destiny Bay if Kennedy wants a new beginning. Kennedy is ready to make her dreams come true. She moves to Destiny Bay to purchase the bakery which comes with three acres of apples.

“With a little courage and a lot of hard work, you can change your life.”

Luke Callahan is very interested in getting those three acres back. They belonged to his aunt Fi and he needs them for his new business. After his father died, Luke came back home to get her mom out of financial trouble. He also opened a bar with his best friend and has a cider business too. In order to expand, he needs all the apples he can get. He's sure he can convince Kennedy to give them up but he wasn't expecting to fall for her. This will complicate his plans. Does he give up his business opportunity or does he lose the girl he is falling for?

I like both main characters. I like that Kennedy was working hard to succeed in this new town. She was willing to take risks in order to get what she wanted. She acclimated to the town fairly easily despite feeling like an intruder when she first arrived. In my opinion, Luke was lucky to have her. He claimed to be a good guy but he hurt her and I'm not sure I would have been as forgiving as Kennedy was with him.

In regards to the secondary characters, I already like the next couple Bradley Hawk. I'm sure I want to read their story. It's going to be complicated.

“You’re my view, Kennedy. You’re what I want to look at forever.”

Kennedy rested her elbows on the counter and leaned forward. “You cook, clean, and make house calls? Be still, my heart.”
“I aim to please.” He dried off his hands and brought two steaming mugs of coffee to the counter. “Which is why I was trying to be quiet, so you could get another few minutes of sleep, before I surprised you in bed.” He grinned. It was a wicked grin. “Again.”
Luke had done more than surprise her last night; he’d spoiled her for other men. Sure, he was an incredible lover, but it was the tender moments in between that made her nervous.
This thing between them couldn’t last. She knew that. She also understood that if he was looking for something more permanent, she wouldn’t be the kind of woman to inspire that kind of commitment. She was unable to do it with her perfect match, or even her own mother. The one person who was supposed to love her unconditionally. Which left Kennedy painfully afraid that she was missing that elusive quality that led to forever.
Finding out that she was right, that she was unlovable, from a man who obviously had an incredible capacity to love, as she’d seen with his friends and family, would be too painful to survive. So she took the moment for what it was, committing to memory the warm aroma of the coffee, the way the sun cast a glassy haze over the kitchen, and the sleepy expression on his face that made him look softer. More relaxed. Like this was where he was supposed to be.
In this kitchen—with her.
Kennedy was becoming more attached—she could feel it. The way he treated her, the way he made her feel, even the way he looked at her, like right now, as if she were special. Which made her feel special. 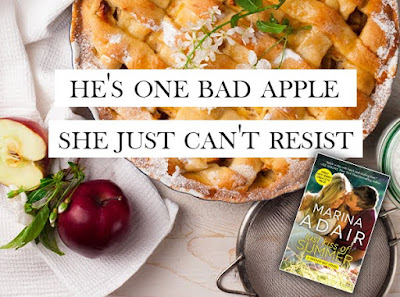 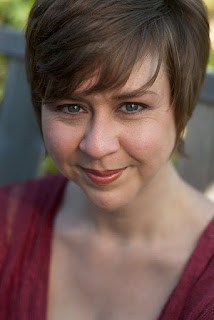 Marina Adair is a #1 National bestselling author of romance novels and holds a Master of Fine arts in creative writing. Along with the Sugar, Georgia series, she is also the author the St. Helena Vineyard series, and her new Heroes of St Helena series. She currently lives with her husband, daughter, and two neurotic cats in Northern California.

As a writer, Marina is devoted to giving her readers contemporary romance where the towns are small, the personalities large, and the romance explosive.