Can I See You Again? by Allison Morgan 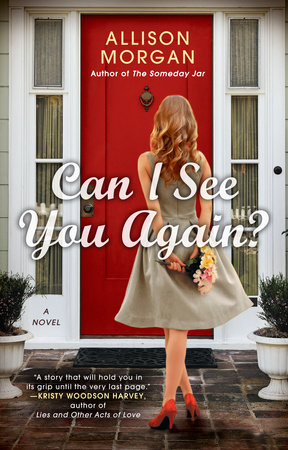 From the author of The Someday Jar comes a witty and warm novel about a matchmaker who’s an expert at matters of the heart—except when it comes to her own...

Matchmaker Bree Caxton has a 98% success rate, a book about to hit the stands, and an amazing boyfriend. Until, that is, he gets cold feet about their future and runs from their relationship.


Afraid no one will buy a book on love from a woman whose love life is a mess, Bree begs her one matchmaking failure, Nixon Voss, to pose as her boyfriend. But when they become a hit with readers, they must carry on their charade just a little longer. Fortunately, they’re both having fun...
But then Bree’s ex decides he wants her back and a newspaper presents a challenge that could expose the truth about her rocky love life. Now she must find the courage to embrace what is, or risk losing something much bigger than her reputation: her heart...

If I have to be honest, I wanted to read this book because I fell in love with the cover. Has that ever happened to you?  Then I read the blurb and I thought it would be fun to read about a matchmaker and her personal ordeal.

The story began with nice character development but after a few chapters, it fell a little flat for me. I don't know if it was because the more lies the heroine told the more unbelievable they felt.

Bree Caxton is trying to promote her book about matchmaking and the day before she has an important interview, her boyfriend of four years dumps her. She is of course, devastated but must find a man who can pose as her boyfriend for the interview. She's saved when one of her clients Nixon Voss appears at her office. In exchange for attending a family wedding with him, he would become her fake boyfriend.

As you can tell the story is only going to get more convoluted. Bree's lies are going to snowball and at some point, the truth is going to come out and make her life even worse.

Now, I do want to say that there are some funny scenes between Bree and Nixon. Nixon was a good guy and he seemed to bring out the best in Bree. I thought they had chemistry together which was completely absent from her relationship with Sean.

I wished I had loved this book as much as I thought I was going to. I think a longer last chapter or an epilogue could have helped. Instead, the last chapter felt rushed.

Email ThisBlogThis!Share to TwitterShare to FacebookShare to Pinterest
Labels: Review Allison Morgan, Can I See You Again?, Review