Mad for the Plaid (The Oxenburg Princes #3)
by Karen Hawkins 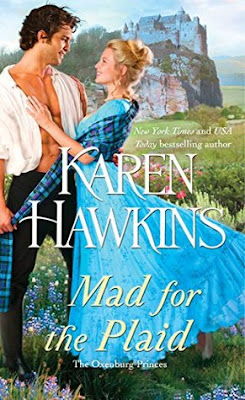 The third captivating, sizzling Scottish historical romance in New York Times bestseller Karen Hawkins's Princes of Oxenburg series. Fans of Julia Quinn, Monica McCarty and Julie Garwood will be enchanted by this dazzling read.Prince Nikolai Romanovin is bored out of his bejeweled crown with London's society scene. If he has to make inane small talk or dance with one more tongue-tied virgin, he might actually run off. So when he gets word his beloved grandmother might be in danger back in his homeland of Oxenburg, Nik is all too willing to rush to the estate she's been staying in in the snow-capped mountains of Scotland. Arriving in secret only to find his grandmother missing, Nik devises a plan to switch identities with a member of his honor guard so he can move around freely without the pomp and circumstance that comes with the Crown Prince title. He relishes the freedom that comes with losing his title, until he spots her...While her five older sisters all enjoyed seasons, got married to men of high station, and had children of their own, Lyssa, the baby of the family, was left at home to be raised by her absent father and her sharp-witted, but ailing grandmother after losing her mother in childbirth. Now twenty-nine years old, the sole caretaker of her grandmother, and the entrenched mistress of the castle, Lyssa has resigned herself to living at the castle and enjoying the amusements offered - spending time with her grandmother, copious amounts of reading, wild rides through the moors, and the occasional ball in the local town. All in all, it's a satisfying, if sedate, life . . . But when she meets a guard more handsome, and far more arrogant and sure of himself than any man she's ever met, she's determined to figure out his secrets, no matter the cost.

Before reading this book, I had never read a book by Karen Hawkins. Since finishing Mad for the Plaid, I have decided that I need to read every book she has ever written. This book was witty, action packed, exciting, charming, romantic, steamy, and so much more. Everything I have ever wanted in a historical romance was granted to me with this book. It is safe to say that I throughly enjoyed this book. Right from the beginning, I was hooked to this book. The plot was just so addictive! Every time I finished a chapter, I just HAD to read the next chapter so I could figure out what was going to happen next. There was a bit of a lull in the plot near the middle of the book. However, it was thankfully very short-lived. There were also some predictable storylines, but I still enjoyed the story nonetheless! Nikolai and Lyssa were fantastic together. Their banter was hilarious and filled with chemistry. I was laughing out loud at some of the things they said to each other. Also, the passion they shared was incredible!The development of the romance was great. I thought Karen did a great job at pacing their relationship so it felt believable. I was shipping Lyssa and Nikolai so hard! I got to a point where I would internally scream anytime they would look at each other. Just thinking about them is making me fangirl as I write this review!

Lyssa and Nikolai were fantastic characters. Nikolai was a bit dark and serious, but he had a secret playful side. It was so nice to see Lyssa expose that side of him. I loved getting to know Nikolai more, and I fell in love with him right alongside Lyssa. Lyssa was kind and considerate, but she stood her ground. I loved how fierce and determined she was. She was the perfect woman to be by Nikolai's side. I thought they balanced each other so well. I could read about them forever and ever!Overall, this was a fantastic read. I am so glad I decided to pick this book up. If you are a fan of historical romances, then this is a book you definitely need to check out! 4 / 5 Fangs*This ebook was given to me in exchange for a honest review. *

Posted by MissDaemon at 8:15 AM