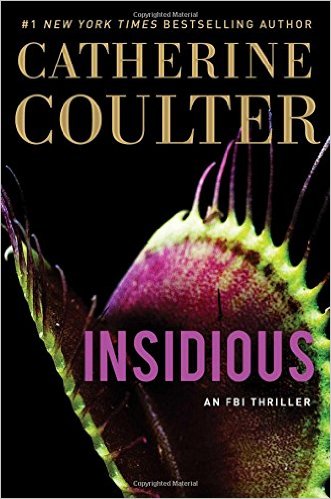 Insidious is the twentieth thriller in #1 New York Times bestselling author Catherine Coulter's FBI series. FBI agents Savich and Sherlock must discover who is trying to murder Venus Rasmussen, a powerful, wealthy society icon. They soon find out that the danger may be closer than expected.

Venus Rasmussen, a powerful woman who runs the international conglomerate Rasmussen Industries, believes someone is poisoning her. After Savich and Sherlock visit with her, someone attempts to shoot her in broad daylight. Who’s trying to kill her and why? A member of her rapacious family, or her grandson who’s been missing for ten years and suddenly reappears? Savich and Sherlock must peel away the layers to uncover the incredible truth about who would target Venus.

Meanwhile, Special Agent Cam Wittier leaves Washington for Los Angeles to work with local Detective Daniel Montoya to lead the hunt for the Starlet Slasher, a serial killer who has cut the throats of five young actresses. When a sixth young actress is murdered, Cam comes to realize the truth might be closer than she’d ever want to believe.

With breakneck speed and unexpected twists and turns, Coulter’s Insidious will leave you breathless until the shocking conclusion.

About 8 years ago, after devouring every single In Death book by J.D. Robb, I discovered Catherine Coulter. I remember being totally addicted to the writing and the flow of the storyline. The crime, the love, the hate. I remember Sherlock and Savich and loving everything about these two intense characters.

I read the first eight or so books back to back. Then as it happens, other books got in the way and I didn’t keep up with the new releases. When I received INSIDIOUS in the mail, I was ecstatic. It was the perfect opportunity to jump back into this unforgettable series. Even though it was book #20 I knew I could easily jump back in the flow of this series. And I wasn’t wrong.

INSIDIOUS is about two cases:

Special Agent Cam Wittier is sent to California to work with the local police. There’s a serial killer going around killing young actresses. The killer sneaks into the victim’s house late at night, slits the victim’s throat, takes their phone and computer and leaves without a trace.

Meanwhile back at Washington, a very close family friend of Sherlock and Savich is being poisoned. She’s an 85 year old woman in charge of a VERY wealthy company. As Sherlock and Savich dig through the case they discover that only family would truly benefit from her death. But would a family member be so money hungry? When everything comes out, everyone is left shocked!

There is honestly nothing better than a good, well written, FBI thriller. Catherine Coulter knows how to weave and web incredibly heinous crimes that make you think and shudder. The whole time I was reading I couldn’t stop myself from trying to figure out what was going on and “whodunit”. But page after page I was honestly stumped.

Now it has been years since I’ve read my last Coulter book, but I do feel like this book was a bit different than the previous books I’ve read. It did have all the fun, thrilling, crimes… and the extremely smart FBI agents, but I remember more romance when I read the first eight books. INSIDIOUS didn’t have very much romance at all, and while I did miss the intensity of that. . . I still absolutely loved that we were more focused on the crime than the relationships between the FBI agents (Sherlock and Savich excluded).

I’m so happy that I dove into this one. I definitely think it’s time to go back and reread all the books I’ve missed!