Just What I Needed
by Lorelei James 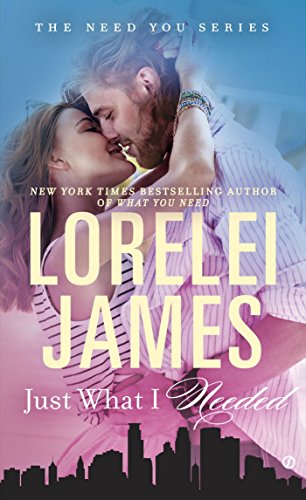 The second sexy novel in the Need You series, from the New York Times bestselling author of the Mastered Series and the Blacktop Cowboys® Series. Trinity Carlson might be having the worst day ever. And that was before she started drinking in a dive bar, right across from her ex and his new girlfriend. So when she finally decides enough is enough, she grabs hold of a hot, blond stranger and gives him the kiss of his life. Walker Lund never expected that a chance at love would hit him right on the mouth. Since the moment his brother decided to settle down, Walker has been dodging his family’s hopes that he’ll do the same.  He’s never been interested in following in anyone’s footsteps. But when he discovers his sexy assailant has given him a fake name and number he suddenly finds himself in the mood for a little hot pursuit...

I absolutely adore this series by Lorelei James. The Need You series is definitely one of the cutest series I’ve ever read. They are full of humor, love, and some very hot scenes.

JUST WHAT I NEEDED is the second book in the series. The beginning starts off with Trinity in a bar. Her best friend ditches her for a hot rugby player so Trinity is left alone to deal with her ex and his new girlfriend when he comes in. After an awkward exchange she sits down and wallows in her self pity. Enters Walker.

Trinity is IMMEDIATELY drawn to this man with long locks and a scruffy beard. She walks right up to him and kisses him. After the intense kiss they sit and talk for a while. Both extremely interested. When Walker is called away they make plans to see each other again. Only problem is: Walker thinks Trinity’s name is Amelia… and the number Trinity gave him was her old, disconnected one.

You guys. This book is full of fun. You know that feeling when you open an book and no matter what you have you do, you literally can’t put down the book? It use to happen to me often, but lately I find myself not as addicted to the story. So when I picked up JUST WHAT I NEEDED I didn’t expect to do the whole “one more chapter” thing. But man, I literally read this book in one sitting, one chapter at a time.

Trinity was hilarious. Everything out of her mouth was honest and hilarious! She was such a fun character to read.  Add in hot, blond, Walker… the chemistry is off the charts.

Another thing I really loved about this book was the family connections. The brothers and cousins were all pretty close, (even with the recent drama). I love stories that have strong family ties, especially when the family members are so different.

If you’re looking for a book that’ll keep you fully entertaining, laughing hysterically, and then crying… you have to pick up Just What I Needed. This book was SO amazing. I hope there will be many more books in this series!

Email ThisBlogThis!Share to TwitterShare to FacebookShare to Pinterest
Labels: Review Just What I Needed, Lorelei James, The Need You series