A Knight With Grace by Laurel O'Donnell

A Knight With Grace

Lady Grace Willoughby defies her father’s orders to marry Sir William de Tracy and escapes with a friend. She has no intention of wedding a cursed man, a man ostracized from the church, a man who would only doom any future children they might have to the fires of Hell. She prays for a knight to rescue her. Excommunicated and outcast for a horrible crime in his past, Sir William de Tracy searches for forgiveness. Marriage has never crossed his mind until Lord Willoughby commissions him to retrieve his fleeing daughter and honor the dying wish of his father by marrying Grace. But things are not as they seem. And when an assassin tries to kill Grace, William must choose between his soul and the woman he has come to love. Can William and Grace overcome their past and find the redemption and love both are so desperately seeking?

Grace glanced at the overgrown doorway, the weeds twisting and turning as if to block her way. There was a rectangular area beside the cottage that seemed particularly overgrown with thick weeds and tall stalks of grass. It must have been the garden at one time, but it was almost non-existent now. If it weren’t for the lone vine of cucumbers she might not have recognized it.

She suddenly felt Curtis’s gaze on her. She hadn’t realized she was wringing her hands until he grasped one. “Would you like to go home now?”

Shocked, she pulled her hand free of his. “This is my home now. This is our home. It just needs a little...work.” A little work? They would have to pull all the weeds and replant. She didn’t know if they would even get any food this year. As she gazed at him, a slow realization dawned in her. “You thought I would return home?”

Curtis bowed his head, ignoring the question. He gently pulled her toward the doorway. “Come. See the inside.” But he stopped as a figure appeared in the doorway and stepped out into the daylight. “Who are you and what are you doing here?”

The man was dressed in chainmail with a sword strapped to his side. He wore no helm, his dark hair falling to his shoulders in waves. He glanced at Grace. Blue eyes burned into her, sweeping her from head to toe. She was surprised she wasn’t afraid of this man.

“Who are you?” Grace asked.

Laurel O’Donnell has won numerous awards for her works, including the Holt Medallion for A Knight of Honor, the Happily Ever After contest for Angel’s Assassin, and the Indiana’s Golden Opportunity contest for Immortal Death. The Angel and the Prince was nominated by the Romance Writers of America for their prestigious Golden Heart award. O’Donnell lives in Illinois with her cherished children, her beloved husband and her five cats. She finds precious time every day to escape into the medieval world and bring her characters to life in her writing. 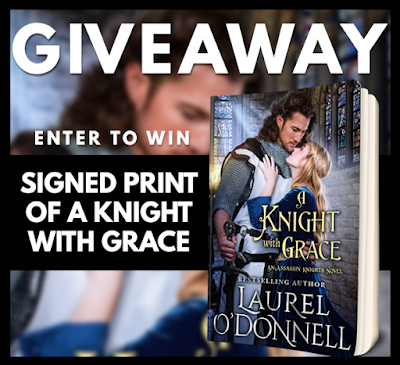