In the Waning Light by Loreth Anne White 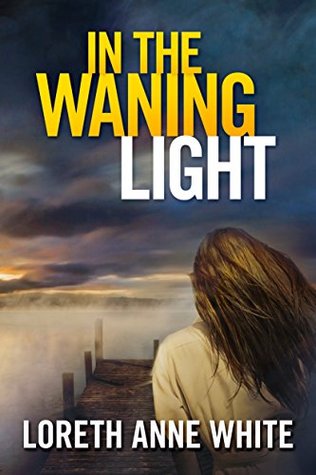 Two decades after her sister’s brutal attack and murder, Meg Brogan has finally found happiness…or so it appears. A bestselling true-crime writer, Meg has money, fame, and a wealthy fiancé. But when a television-show host presses her to tackle the one story everyone claims she cannot write—the story of her own family’s destruction—her perfect life shatters.
Determined to finally face her past, Meg returns to her hometown of Shelter Bay. Shrouded in cold, brooding fog, the close-knit coastal town harbors dark secrets and suspicious residents. One of the few people to welcome Meg back is Blake Sutton, her high-school sweetheart and the marina’s new owner. Desperate for clues, Meg digs through her family’s files. As Pacific storms brew outside, her passion for Blake reignites.
But someone doesn’t want Meg digging up the past. And that person will go to deadly lengths to prevent the writer from revealing a terrible truth.

The ways in which we deceive ourselves . . . the stories we tell others to hide from our own truths . . .
In the Waning Light is another great book by Loreth Anne White. She has a way of making the story exciting while making me doubt my suspects a bunch of times. Every time I was sure I knew who was the culprit, some twist made me look in a different direction.
The book starts with Meg Brogan, a famous author who writes true-crimes, going back to her home in Shelter Bay. She wants to write about the murder and rape of her older sister which happened twenty years ago. Meg's fiancée recently broke up with her because he believed she wasn't able to commit. Meg wants to prove him wrong.
Blake Sutton has never forgotten his first love, Meg. He is now a widower and he's starting to learn to be a parent. Before his wife got sick, he was touring in Afghanistan as a medic. He left the military to take care of his son and his family's business. Seeing Meg again brings all the good memories to life. It also brings guilty feelings. Blake is hiding something but he's not the only one.

"She’d cut them all out of her life, excised this place like a cancerous tumor in order to survive. And he’d been too close to the lesion she’d needed to separate out. Collateral damage."
I felt bad for Meg. The town was so full of secrets and no one really wanted to talk to her about the case. Meg deserved to know the truth. Due to her sister's murder, Meg also loses her parents. The worst part is that Meg probably knows who killed her sister but she has no recollection of the events that night. She only knows Blake found her and saved her from drowning.


"The choices we make, the secrets we keep for those we love, the ripple effect down the years, the prices we pay . . ."
I was happy Blake was there to help Meg and protect her once he got over seeing her again. It was easy to adore Blake. He truly loved her and he was hoping for his second chance at happiness.  The scenes with him and his kid were sweet too!
I can strongly recommend this book if your like suspense and thrillers. The end nearly killed me.
Cliffhanger: No
4/5 Fangs
Posted by MrsLeif at 9:00 PM