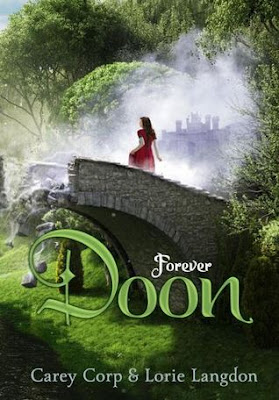 With the witch of Doon on the throne, Jamie believed dead, and Duncan and Mackenna trapped in Alloway, Veronica has no choice but to put her grief aside and prepare her remaining followers for the impending battle against the false queen and her forces. But while on a covert mission to steal a powerful elixir from the castle, Veronica discovers her true love may actually be alive, and fighting a battle of his own.

With the Brig o’ Doon destroyed and the portal fragmented, Doon’s forces are not only divided, but also isolated in different dimensions. With the help of a storyteller as ancient as the witch herself, Kenna and Duncan learn they must rebuild the bridge to have any chance of crossing back into Doon with their ragtag army. But when Mackenna insists on fighting as well, Duncan soon realizes the only way he can ensure her safety is to turn her into a cold-hearted killer.

For Vee, Jamie, Kenna, and Duncan, saving their kingdom while keeping their lives intact will take a miracle.

After the ending of the previous book in this series, I was really interested in seeing what was going to happen next. I thought the books got more and more exciting as the series went on, so I was really looking forward to seeing how the series was going to wrap up! This book wasn't my favorite book in the series, but it was still a fun book to read. One of the issues I have had with this series is that the writing reads as preteen instead of teen. I was hoping that would maybe change as the series went on, but it didn't. The dialogue felt a quite immature at times, which would annoy me. I really think young teens would adore this writing style, because I know I definitely would have when I was younger! However, at my age now, I just find it a bit childish. Another issue I had with this book was that I was still not able to connect with McKenna. McKenna made unnecessary drama throughout the entire book, which was very annoying. She also made countless musical references that I never understood. Unfortunately, her chapters were always my least favorite to read.All that being said, there were a lot of things I did enjoy in this book! I thought Vee's storyline in this book was very addictive and interesting. I blew through her chapters! I really connected to her as a character, and I admired her strength in this book. I also love her with Jamie. They are adorable together! Another thing I enjoyed in this book was the action. I thought the action was intense! The authors were able to write the action scenes in a way that I actually felt like I was there in the moment. It was great!Overall, I thought this was a fun book! There were things I didn't like, but I thought this a lovely way to wrap up this series. I would recommend this series to any preteen who loves fairytales, romance, friendship, and action!