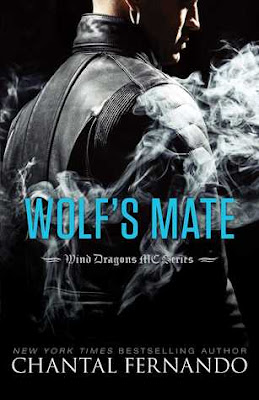 Vinnie was once the youngest prospect at the infamous Wind Dragons Motorcycle Club but finally, he’s going to be initiated as a full-fledged member! But when Vinnie (now known as Wolf) puts on that WDMC leather for the first time, little does he know what he’s in for. The Wind Dragons have made enemies, and being a member means being on the front lines…

Wolf's Mate proved that Chantal always writes a fun and steamy book! Even though there were some things I didn't like about this book, I still enjoyed it as a whole.When the main female character, Shayla, was first introduced in Vinnie's POV, I was turned off from her right away. Shayla was portrayed as a spoiled brat, and I didn't want any part of that. I am glad that I didn't let that stop me from finishing the book, because Shayla turned out to be very likable! The more that I learned about Shay, the more I really connected with her. I thought she was an enjoyable and relatable main character! Vinnie was sexy and so dedicated to the people he cared about. I loved how devoted he was to his MC family. I thought his interactions with the club members and their significant others were great! I really enjoyed learning more about Vinnie in this book.Vinnie and Shay made a great couple! I thought they were very sweet together and they had great chemistry. This book was very steamy, and I thank Chantal for that! ;) The major issue I had with this book was that it got very slow and repetitive. I started to feel like nothing was happening plot wise. The characters were just doing what other characters did in previous books, and it just felt redundant. I would have liked some new and exciting plot points in this book. However, I did like the MC politics in this book. I thought that aspect was really interesting to read about!Overall, I thought this was a sexy and fun read. There were some parts that felt a little boring, but it was a fast paced read as a whole. I am excited to continue with this series and see what happens next!

Vinnie used to be the prospect in earlier books. Now, he's a full member of the Wind Dragon MC. He loves the club, his brothers and he's not ready to settle down like most of his brothers have. When he gets a call from Talon to call in his marker, he doesn't even try to object. The mission is to keep Talon's cousin alive for a few days until Talon can find a better way to protect her.

Shayla is in trouble after her father, an accountant, goes to prison after cooking the books. This made very bad people angry at him and Shay, since she used to help him.  Now, someone is gunning for her because they think she has her father's ledger which could implicate them further.

When Vinnie and Shay meet for the first time, sparks start flying but neither want to acknowledge them. Vinnie wants to finish his time without making the mistake of sleeping with her. Shay has better things to do, like keeping herself alive, than falling for a bad boy biker.

Sadly, the bad guys are not going to stop until Shay is dead.

The Wind Dragon is a great series. However, Wolf's mate was not like past books. If you are looking for tons of action, this one doesn't have it. The pace was slower than the rest.

One of the things I liked was to read about some of the characters already depicted in prior books. The girls are always a riot and they are always thinking about crazy schemes. They make me laugh and I love how close they have become.

Vinnie is a new full fledged member of the Wind Dragons MC. After prospecting for so long he’s found a family within the club. When a different club’s president calls in a marker, Vinnie must go no questions asked. He’s asked to watch the president’s cousin, Shayla, who is known to be a bit of a high maintained brat.

Shayla didn’t ask to be held “prisoner” in her own home. Guarded 24/7 she’s grown to be very snippy with the guards. When Vinnie comes in she acts no different. He already thinks she’s spoiled, so why try to prove him differently?

But what Vinnie doesn’t realize is that Shayla is actually unlike anything he’s heard about her. And when he sees her for who she really is, it doesn’t take long for him to be completely addicted to her. But their “relationship” will come at a price. There are still some very bad men out to kill her, and Vinnie will do anything in his power to keep her safe.

**
I absolutely love this series. Anytime I’m in a book slump, or just have one of my “bleh” reading feelings, I know if I pick up a Wind Dragon book it’ll get me out of my slump.

When I opened the book I have to admit was really worried about where the story was going. Vinnie was going to be four hours away to look after Shayla, which meant he would be away from his club and the character I’ve grown to love. I didn’t want that. I love that each book we still see so much of the other characters that I’ve followed in this series. They bring so much life and entertainment that I truly didn’t want to start a book without them in it. I am super happy to say that we were still able to see plenty of the other MC members… and their feisty women.

I will always have a very sweet spot for this series. I honestly live for books like this, and Vinnie and Shayla were so fun together. I can’t wait for more in this series. I know I’ll love them all.