Worked Up by Tessa Bailey

Factory mechanic Duke Crawford just wants to watch SportsCenter in peace. Unfortunately, living with four divorcee sisters doesn’t provide much silence, nor does it change his stance on relationships. But when a fellow commitment-phobe stumbles into his life, getting him good and worked up, he can’t deny his protective instincts.

Samantha Waverly’s brother just put her in an impossible situation. The only way out? Marry huge, gruff, gladiator look-alike Duke—for show, of course. She doesn’t make promises—she knows too well how easily they can be broken—and this is no exception. As the blistering attraction between them grows, the lines around the no-strings relationship blur. But Duke and Samantha’s marriage is only for show…or is it? 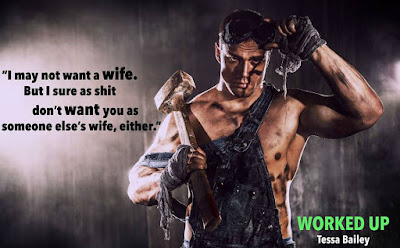 Unbelievable. First, Duke couldn’t get a damn moment of peace in his house, now his only refuge, The Third Shift, had been invaded. Was it so much to ask in life for a sporting event to go uninterrupted by a woman? Granted, the doe-eyed brunette hadn’t asked for his assistance—and she was a far cry from the four sisters terrorizing his household indefinitely—but an interruption was an interruption, no matter how you sliced it.

He couldn’t help but notice this particular disruption was…pretty. Too pretty for him. Not that her appearance mattered one way or another to Duke. Facts were facts, though. She had a way of moving. Long, graceful moves that ran smack into uncertainty. As if she kept forming courses of action only to change her mind halfway through the execution stage. Ask him why he’d taken the time to form such a detailed observation and his answer probably wouldn’t make much sense. Unfortunately, noticing her way of operating had led to…other observations. Impolite ones that would’ve surrounded the freckles on her cheeks with pink instead of flawless ivory.

Good thing he wasn’t looking for a woman. Not for one night. Not for nothing.
With resolve firm in his mind, Duke focused on the problem at hand. Namely, the issue distracting him from America’s game. The two men harassing Doe Eyes were machinery mechanics who worked under him at the factory, and after his brief directive to fuck off, they wasted no time shuffling away, beer bottles held up like little white flags.

He grunted, watching them enviously as they rejoined their friends in front of the giant flat-screen. At least someone would get to watch baseball now, huh? As for him, he appeared to be stuck. For as long as Doe Eyes graced The Third Shift with her not-from-around-here presence, that is. Because if it wasn’t the knuckleheads looking to purchase her drinks, it would be someone else. And after he’d watched her flounder over a simple drink order and whack her noggin on the bar, he figured she deserved some peace and quiet.

Which she would get, so long as she let him watch the motherloving game.
Duke grabbed the closest stool, flipping it around and repositioning it behind Doe Eyes. Trying not to wince over the loud creaking as he climbed on, Duke crossed his arms and went back to watching the game, bottle of Bud in hand.

He should have known the silence wouldn’t last. It never did.

“Did you just...set yourself up as a roadblock?”

ARE YOU WORKED UP? DON'T MISS THE OTHER BOOKS IN THE MADE IN JERSEY SERIES....

His inspiration. His torment. And his temptation... Jasmine Taveras is the reason Sarge Purcell grabbed his six-string and bailed the hell out of New Jersey four years ago. She's the fuel for every song he's ever written-each one laced with bitter, hard-edged, hungry lust. Now, with his hugely successful band is on temporary hiatus, Sarge is determined to prove to Jasmine that this "kid" turned into every inch the man she's always needed...

Men are slim pickings for a single factory girl in Hook, New Jersey...until tall, broad-shouldered hotness walks-or ratherstorms-into Jasmine's life. Sarge's return shouldn't affect her this way. He's her best friend's much younger kid brother, and the kind of rough, gritty, sexiness Jasmine has no right to taste for herself. Even if he lets her. But lust is a blinding, insatiable force. And when it crashes, it will take both Sarge and Jasmine down with it...

He has one last chance to deserve the girl of his dreams...
Overachiever River Purcell was never supposed to be a struggling single mom, working double shifts just to make ends meet. Nor was she supposed to be abandoned by her high school sweetheart, breaking her heart into a thousand jagged pieces. Now Vaughn De Matteo is back in town, his sights set onher...and River is in danger of drowning a second time.

No one believed Hook's resident bad boy was good enough for River. Not even Vaughn himself. But he'll fight like hell to win back the woman he never stopped loving, to keep the daughter he never expected, and convince himself he's worth their love in the process--even if he has to rely on their fierce and undeniable sexual chemistry. But even as River's body arches under his hungered touch, the demons of the past lurk in the shadows. Waiting for Vaughn to repeat his mistakes one last time...