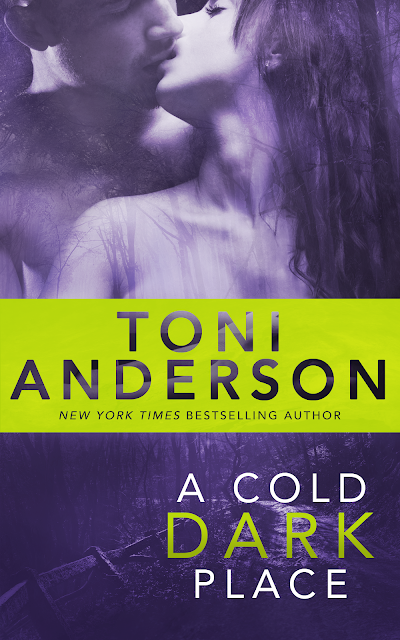 Toni Anderson's A COLD DARK PLACE is available now for free! If you're looking for a thrilling and sexy romance, you do not want to miss this first book in her bestselling Cold Justice series!

Former CIA assassin Alex Parker works for The Gateway Project, a clandestine government organization hell-bent on taking out serial killers and pedophiles before they enter the justice system. Alex doesn't enjoy killing, but he's damn good at it. He's good at dodging the law, too--until a beautiful rookie agent has him wondering what it might be like to get caught.

FBI Special Agent Mallory Rooney has spent years hunting the lowlife who abducted her identical twin sister eighteen years ago. Now, during an on-going serial killer investigation, Mallory begins to suspect there's a vigilante operating outside the law. She has no choice but to take him down, because murder isn't justice. Is it?

Sometimes it's cold and dark.

When Mallory starts asking questions, The Gateway Project management starts to sweat, and orders Alex to watch her. As soon as they meet, the two begin to fall in love. But the lies and betrayals that define Alex's life threaten to destroy them both--especially when the man who stole her sister all those years ago makes Mallory his next target, and Alex must reveal his true identity to save the woman he loves. 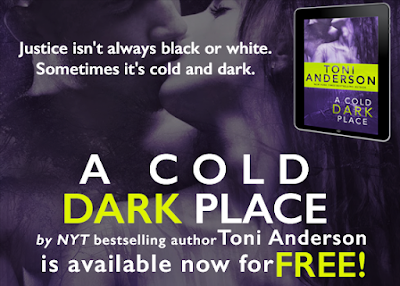 Get your hands on A COLD DARK PLACE for free:
Amazon | iBooks | Barnes and Noble | Kobo | Google Play

“We’re up to fifteen women,” Lucas’s voice was gruff. The dark circles under his eyes added a worn out quality to his grim expression. He answered her silent question with a shake of his head. “I didn’t see any kids and no one who looked like Payton.”

Mallory was torn between disappointment and relief.

“He kept more personal trophies in his bedroom. Whoever shot the sonofabitch did the world a favor.” A flicker of unguarded emotion crossed his face. Then he buried it beneath six years field experience and a flat cop stare. “You’ll hear all the details at the briefing.” He rubbed the back of his neck. “Lemme get a coffee and we’ll head over together.” He froze as a stranger wearing a visitor badge and carrying a laptop walked through the office doorway. “Alex? What the—?”

“You missed the meeting, asshole.” The man’s expression was fierce. “Thought I’d hunt you down and make you buy me a beer.” His gaze darted to her. “Looks like a bad time though.”

“That was today?” Lucas palmed his forehead. “Jesus, you’re right. I’m an asshole.”

“I already covered that.” The man— Alex— grinned, and Mallory got a fierce blast of gorgeous. The response wrung a reluctant smile out of Lucas.

“Believe it or not, Mal, this is a good friend of mine, Alex Parker. I asked him to attend a Counterintelligence Awareness Group briefing I organized so he could tell us about some of the latest internet security measures being developed in the private sector. He runs his own company in DC. Does a lot of government contracts. We served together in Afghanistan.” His gaze swung back to Alex. “I assume the meeting went ahead without me?”

Alex nodded. “We managed to fumble along without your incisive brilliance.”

“Yet I’m the asshole,” Lucas grinned. “This here is Special Agent Mallory Rooney.”

The stranger held out a tanned strong-looking hand as they were introduced. His skin was warm, fingers firm as they squeezed hers.

“It’s a pleasure to meet you, Agent Rooney.” The self-deprecating smile was a killer. So was the short, ruffled light-brown hair and days’ worth of scruff on his jaw.

Despite the tailored suit, he hadn’t been intimidated enough by the high powered members of that committee to shave. The contrast snagged her attention. He was different from the law enforcement personnel and political players she usually met. There was something underplayed and restrained about him that didn’t mesh with the keen intelligence she saw in his eyes, nor the taut looking muscles that filled out that suit. It intrigued her. She hadn’t been intrigued on a personal level in a long time.

“You work in security?” she asked. “Keeping Trade Secrets secret— or trying to. It isn’t exactly running the gauntlet every day like you guys.”

Lucas sat atop his messy desk. “Says the man with the Distinguished Service Cross.”

Something vulnerable sparked in those slate eyes. “I got caught in a firefight and managed not to get killed. I got lucky.” Those eyes of his weren’t revealing anything now— all emotion banked. “I better let you get back to work. It’s a long drive back to DC.”

Their boss walked in and Mallory stiffened. Danbridge’s gaze skimmed Alex with a cursory glance that notched up to feminine appreciation on the second go ’round.

“Special Agent Randall, I need a word.” Then she walked into her office, heels tapping.

Lucas swore under his breath. “Alex, I owe you big time, buddy. I’ll be in touch. Will you show him out for me, Mal?” “

Sure,” she said. The longer she could avoid her boss the better. The two men shook hands and said goodbye.

“I can find my own way,” Alex said softly.

“No problem. I need to stretch my legs anyway.”

His gaze flicked to her boots and up, the brush of it almost as intimate as a physical touch. An unfamiliar sliver of sensation unfurled inside her, nearly unrecognizable because it had been so long. Attraction.

Telling herself she wasn’t deliberately prolonging their time together, she took the stairs as she led the way out. He was taller than she’d first realized. In her low-heeled boots she stood just under five foot nine and he was four or five inches taller. She frowned. Seeing him at a distance standing beside Lucas, she’d have described him as medium height and just okay looking. Up close, when you got the full force of those intelligent gray eyes and that perfectly proportioned masculine face, he was a hottie. Made you appreciate the inaccuracy of eye-witness accounts. No wedding ring either.

It was her job to pay attention to detail.

Even though she maintained a space between them she was hyperaware of him beside her. Outside the front entrance of the five-story, white concrete building he turned to her and asked, “Can I take you out to dinner sometime?”

“I don’t date.” The answer came out automatically before her brain engaged. Crap.

There was a long pause while those beautiful eyes of his wandered over her face, resting on her bruise from yesterday. He didn’t argue or try to change her mind.

“It was nice to meet you, Special Agent Rooney.” And then he walked away.

She squeezed her hands into fists. Damn, why had she said no?

Because she didn’t date.

She watched Alex Parker climb into his car— a low-slung sporty job— and raise a hand before he drove away. His car disappeared and a familiar sense of loss rushed over her. She clenched her jaw, turned around and went back to work.

New York Times and USA Today international bestselling author, Toni Anderson, writes dark, gritty Romantic Suspense novels that have hit #1 in Barnes & Noble's Nook store, the Top 10 in Amazon and Kobo stores, and the Top 50 in iBooks. Her novels have won many awards. A former Marine Biologist from Britain, she inexplicably ended up in the geographical center of North America, about as far from the ocean as it is possible to get. She now lives in the Canadian prairies with her Irish husband and two children and spends most of her time complaining about the weather.

Toni has no explanation for her oft-times dark imagination, and only hopes the romance makes up for it. She's addicted to reading, dogs, tea, and chocolate.

If you want to know when Toni's next book will be out, visit her website (http://www.toniandersonauthor.com) and sign up for her newsletter. If you want to read other fascinating stories about life in a city that, during winter, is sometimes colder than Mars, friend her on Facebook: (https://www.facebook.com/toniannanderson).