His Royal Favorite (His Royal Secret #2)
by Lilah Pace 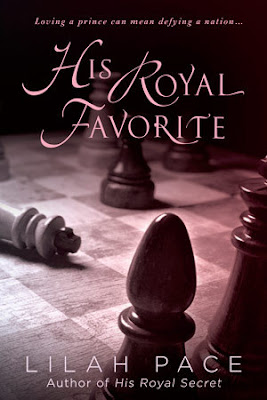 The conclusion of Lilah Pace’s racy, romantic male/male duology following His Royal Secret...James, Prince of Wales, is making history. He's decided to come out to his subjects—and the world. However, telling the truth means exposing his relationship with lone-wolf reporter Benjamin Dahan. Although Ben never wanted commitment, the unexpected depth of his feelings leads him to join James in the media's harsh spotlight. When the news story explodes across the globe, Ben can endure the mockery and dirty jokes. But after his tragic past is cruelly revealed, his life begins to implode. Can even his love for James be worth this? James has it no easier. His revelation divides the country and sparks turmoil within the royal family. He must struggle to defend not only himself and Ben, but also his younger sister, who hovers on the brink of a breakdown that could endanger her life. Is Ben strong enough to survive the onslaught and stand by James' side? And will James have to make a choice between Ben and the crown?

How is this series over already? I cannot comprehend the fact that I will never read a new story about Ben and James again. I just finished this book and I miss them already. WHAT HAVE YOU DONE TO ME LILAH? I AM AN EMOTIONAL MESS!

This book was a great conclusion for Ben and James. I was really worried that this book was going to be full of misunderstandings, lies, and miscommunication. Thankfully, it wasn't! James and Ben were always open and honest about their issues. THEY ACTUALLY TALKED THINGS OUT! It was so refreshing to read a romance that didn't have unnecessary angst. The issues that James and Ben faced were realistic and were handled in a mature way. It just proved how perfect James and Ben are for each other.

The romantic moments in this book were extremely swoon worthy. James and Ben had some really touching moments that had me smiling and giggling. I absolutely adore them together. They also had some very steamy moments that I thought were very well written. Their chemistry is off the charts!I really love Ben and James as individual characters. They are both so unique and they have so many layers to them. I thought the author did a great job at developing their characters even more in this book. Overall, this was a great way to end this series. I loved every moment of this book! I am so sad that this is the end for Ben and James, but it was a beautiful way to end their story.

Posted by MissDaemon at 8:15 AM