Highway to Hell by Max Brallier 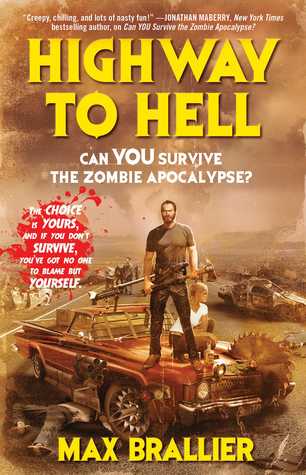 The sequel to the “pick-your-own-path” adventure Can YouSurvive the Zombie Apocalypse?, which the Florida-Times Unionhailed, “may just be the best thing to happen to literary zombies since Max Brooks”—for fans of the blockbuster phenomenonThe Walking Dead.


You’ve probably read your fair share of zombie stories. But this time it’s different. In a horrific and hilarious cross-country road trip (or rather, suicide mission), you must overcome obstacles of every kind to save zombified America from utter collapse.


You're inside your prison cell, waiting to be released. Your name is Jimmy El Camino, and you’re a badass—in fact, you’re asupreme badass. Rambo with style. Snake Plissken with a failing liver. You’ve killed more men than cancer. But more men than the zombie apocalypse? That’s questionable.

Your mission? Drive your heavily armed 1967 El Camino from New York City to San Francisco in order to save the world. Along the way, you’ll encounter Ring’s Most Wonderful Circus Show; you’ll battle zombies gladiator-style; you’ll be forced to deal with lunatics. And every step of the way, an army of drivers in armored vehicles is hot on your tail—because there is one man, the mayor of New York, who will stop at nothing to keep this apocalypse of the undead alive.

“ A chance to get some of that back.
A chance for just the tiniest bit of redemption.”

I haven't read a book like this one in a lot of years. The action jumps from a chapter to a different page either forward or backward. I got whiplash from trying to follow the action. I also learned that it was really hard for me to stay alive depending on the path I kept on choosing. The story has a lot of different endings and picking the right one was hard. In all honesty, I'm not sure I picked the right one but it was the one that made the most sense.

The main character is Jimmy El Camino. He is an ex-soldier who has been captured and kept a prisoner for fifty-eight months. One day he is brought out of his cell and introduced to Major Eigle. Eigle promises his freedom as long as he takes a woman to San Francisco. In order to get there, they would have to survive what's out there. The world has changed while he was rotting in a cell. Zombies are all over. There is no President or police to help them. Also, powerful people want to keep the status quo and prevent Iris, who might save the world, from getting there.

Highway to Hell is full of action and you root for Jimmy to succeed and survive. I just don't know if the reader will be able to follow the story in just one sitting without dying multiple times first like I did.