Welcome to the Den … Six minutes is all he needs to get a job done … Kyrnon “Celt” Murphy is one of the best thieves in the world. After all, his childhood was spent with a caravan of Irish Travelers that taught him everything he knows. He got in … He got out … No witnesses … When his latest assignment, one that even the best of thieves couldn’t pull off, brings him into contact with a girl that awakens a part of him he long thought dead, Kyrnon is reluctant to walk away. But in his trade, witnesses meant consequences … And sometimes those consequences meant death …


**NOTE** CELT is book #2 in the Den of Mercenaries series, BUT can be read as a STANDALONE. 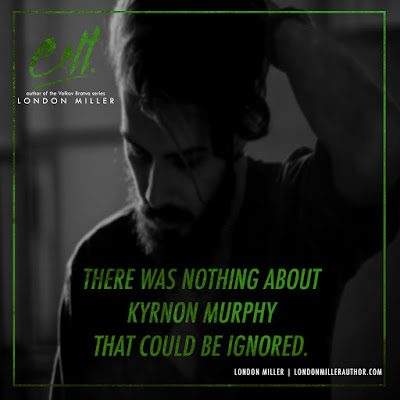 Her apartment was only a few blocks down from Canal Station, but in the time it had taken her to get ready, clouds had rolled in, obscuring the once beautiful sky. Just as quickly as that thought formed, the first few droplets of rain splattered her face, and before she knew it, the skies were opening up.
She ran the last block, glad that she hadn’t gotten too wet in her dash down the street, otherwise she would have looked like she was competing in a wet T-shirt contest. Heading down into the station, she swiped her metro card, walking through the cage-like turnstile. Her train was already boarding, and as she hurried across the platform, she could hear the beeps, the red lights flashing, signaling the doors were closing.
Before she even had a chance to curse her bad timing, a rather large hand reached out, snagging one of her belt loops and tugged her in, seconds before the doors closed at her back.
She stumbled as the train started to move, her Docs squeaking with the movement. Reaching her hands out, she tried righting herself without knocking the guy over that helped her, not that she could, she soon realized. He seemed to be made of stone.
Prepared to thank him—or thank his chest since that was what was directly in front of her face—the moment she tilted her head up to get a better look at him, her breath caught.
Not just because he was attractive, he was definitely that, but because he looked so familiar. It wasn’t because of Rob—Rob was very selective about the circles he ran in. Those were the same circles she had tried so desperately to fit in, but he would never associate with someone so … scruffy.
And this stranger was definitely that.
His eyes were a perfect blend of greens and yellows, flecks of silver near the pupils, brightening them to an even lighter shade of green. How eyes that pale could seem warm, she didn’t know, but they were. He also had a full beard, one that was a deep auburn, a few shades lighter than his darker hair.
Amber realized, almost belatedly, that she was still pressed against him, her hands resting on the firm planes of his stomach, and even if the train wasn’t so crowded, there was still enough space for her to stand on her own.
But she kind of liked where she was.
Even with the shirt around her waist, she could still feel the heat of his palm on the small of her back.
Dropping her hands, she moved back a little. “Thanks.”
His smile was easy, friendly, even as his eyes blatantly swept over her. “No bother at all.”
She couldn’t withhold her smile even if she wanted to. His accent was a dream to hear. It was lilting, and had an almost smoky quality to it.
Irish. He was definitely Irish.

DON'T MISS RED, THE FIRST BOOK IN THE DEN OF MERCENARIES SERIES...

Welcome to the Den…
Seven years ago, Niklaus “Red” Volkov was offered an opportunity, one that would give him the ability to even the score with the Albanian mobsters that had tortured him for days and took the life of the only girl he’d loved. But that gift came with strings…
Molded into the perfect soldier, Niklaus joined an elite group of mercenaries, loyal to a mysterious man known only as The Kingmaker. He willingly paid the price for means to fulfill the vendetta that plagued him each day.
Vengeance was all he knew…
And death was all he lived for…
Until it wasn’t…
Until her… 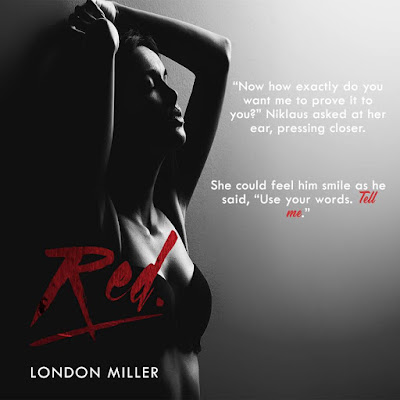 With a degree in Creative Writing, London Miller has turned pen to paper, creating riveting fictional worlds where the bad guys are sometimes the good guys. Her debut novel, In the Beginning, is the first in the Volkov Bratva Series. She currently resides in Atlanta, Georgia with her husband and two puppies, where she drinks far too much Sprite, and spends her nights writing.