The Witch With No Name by Kim Harrison 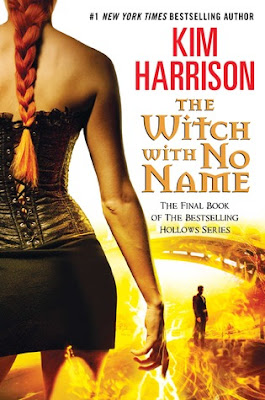 Rachel Morgan's come a long way from the clutzy runner of Dead Witch Walking. She's faced vampires and werewolves, banshees, witches, and soul-eating demons. She's crossed worlds, channeled gods, and accepted her place as a day-walking demon. She's lost friends and lovers and family, and an old enemy has become something much more.

But power demands responsibility, and world-changers must always pay a price. That time is now.

To save Ivy's soul and the rest of the living vampires, to keep the demonic ever after and our own world from destruction, Rachel Morgan will risk everything.

It took me while to read the end of The Hollows series...I'm not sure why. Maybe because I didn't want it to end. After all, Jenks, Trent, Rachel have been characters I have read for years now.

In the end, I'm pretty happy with the end. I liked that Rachel is with Trent. She had some trouble processing his love for her. A couple of instances she wasn't sure what to do because she cared for Biz, Jenks and Ivy too.

I was super worried about how to keep Ivy alive without making Rachel her scion. Cormac was pretty clear, he wanted Rachel to figure a way for vampires to keep their soul. He threatened everything Rachel cared about in order to get her to do it.

The best part of this book were the demons. Al is one of my favorite characters in the series and I was happy he was back in this book with many scenes.  I do wish he and Jenks could have found some love to keep them company in the later years.

One thing that bothered me: Rachel believing she wasn't enough for Trent. I didn't understand why she felt that way. She was a strong witch/demon. I mean she has saved their world so many times, why would she doubt that she was enough for him. Don't get me wrong, I love Trent but I think he was the lucky one. She made him better.

Overall, I was happy...bittersweet ..but happy.

Email ThisBlogThis!Share to TwitterShare to FacebookShare to Pinterest
Labels: Review Kim Harrison, The Hollows, The Witch With No Name