Reign of Shadows by Sophie Jordan 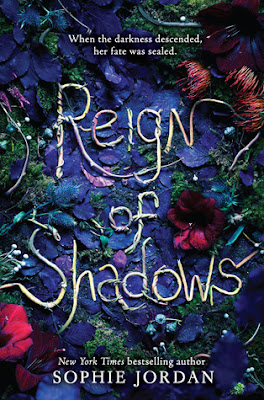 Seventeen years ago, an eclipse cloaked the kingdom of Relhok in perpetual darkness. In the chaos, an evil chancellor murdered the king and queen and seized their throne. Luna, Relhok’s lost princess, has been hiding in a tower ever since. Luna’s survival depends on the world believing she is dead.

But that doesn’t stop Luna from wanting more. When she meets Fowler, a mysterious archer braving the woods outside her tower, Luna is drawn to him despite the risk. When the tower is attacked, Luna and Fowler escape together. But this world of darkness is more treacherous than Luna ever realized.

With every threat stacked against them, Luna and Fowler find solace in each other. But with secrets still unspoken between them, falling in love might be their most dangerous journey yet.

With lush writing and a star–crossed romance, Reign of Shadows is Sophie Jordan at her best.

Luna has been living in a tower all her life. She has two people with her who have helped her. They fed her and taught her how to defend herself. But Luna, dreams of the Outside. She wants to be able to explore.

There is real danger outside the tower. The dwellers are roaming the roads everywhere. The dwellers come out of the earth and they want to eat whatever they can get their hands on. Also, there are some very desperate people ready to fight anyone for food and survival.

Fowler just wants to escape Relhok. He wants to move forward and hopefully find land without dwellers. He is determined to survive. When Luna saves him, he gets angry. He knows he can feel something for her and he wants nothing to do with those feelings again. He lost someone already and falling in love is for the weak.

I found myself liking this recounting of Rapunzel.
I like Luna, she had learned to defend herself and she was not scared of fighting. She was loyal and she loved the people who kept her safe for seventeen years. However, she soon learns that the Outside is dangerous and that maybe her tower life was a good one.

Fowler was kind of the anti-hero. He tried to be selfish and he was rude to Luna for a while. It took some time for him to realize he needed her and he couldn't push her away any longer.

I'm excited to see where the next book goes.

I have seen some mixed reviews for this book, which made me a little hesitant to pick it up. However, I love fairy tale retellings, so I decided to give this book a shot. I am so glad that I did that, because I was one of the people who LOVED this book! I devoured it in one sitting! I seriously could not put it down.

I thought the world the author created was so interesting. The world was creepy, unique, and fascinating. I will say that there could have been more world building, because a lot of background information was left out. There were a lot of things about the world that didn't have a full explanation. That made it a little hard to understand and get into the world at times. However, I am excited to see the world develop more in the upcoming books.

One of my favorite book tropes is when a girl and a boy go on an adventure together. I am a sucker for those tropes, so I obviously loved the fact that this book's plot was based on that. I thought the plot was super exciting! Even when there wasn't any action, I was on the edge of my seat. I was always wondering what was going to happen next. The author's writing literally kept me glued to the pages.

Luna was the Rapunzel character of this story, and I adored her. Luna was a strong girl who was kind and considerate. She genuinely cared for everyone around her. Luna always tried to make the best of every situation, and I really liked that about her. She was absolutely adorable!

The other main character in this book was Fowler. I fell so hard for him. He constantly tried to conceal his feelings. He didn't want to feel anything because he knew it would lead to heart break. He was a bit of a lone wolf. However, as the story progressed, he warmed up and started breaking out of that icy exterior. His character development warmed my heart. I loved watching him start to care for Luna. It was so sweet. I am excited to see his character develop even more through out this series.

Luna and Fowler made a perfect couple. I was shipping them from the moment they met. I can see why people were saying that their romance felt like insta-love, but it didn't bother me at all. I felt like their romance worked really well! I liked the pacing of the romance. I was dying for them to get together. I think their personalities were the perfect match for each other. I still ship them so hard, and I am DYING to see more of their relationship.

It is safe to say that I adored this book. I have not stopped thinking about this book. I am counting down the days until I can get my hands on book two. I NEED IT!