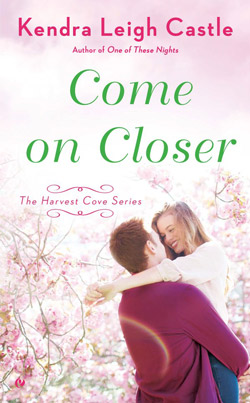 Nothing’s sweeter than a chance at true love...
Larkin O’Neill refuses to let anything stand in her way. Despite a troubled upbringing, she’s created the life she always wanted, surrounding herself with close friends and opening the bakery of her dreams. But the free-spirited baker is blindsided when she falls hard for the local bad boy. She knows that she should stay away, but the sizzling attraction between them is just too tempting...

Shane’s love 'em and leave 'em ways have left him a persona non grata in Harvest Cove. But when Larkin bursts into his life, the handsome lawyer can't think of anywhere he'd rather be than by her side. She’s the first person in a long time who believes there could be more to him than meets the eye. Now he’s determined to prove to Larkin that he’s worth taking a chance on—and prove to himself that he’s the kind of man she deserves.

Shane likes to hang out in Larkin's Pastry shop. She makes sweets and saves treats for Shane because he always shows up and makes her laugh, it also doesn't hurt that he's insanely gorgeous either. For a while now she's noticed the way he looks at her but neither of them have crossed the line until one boring Saturday afternoon. The only problem with that is that all she's ever heard about him is that he's a major playboy. It's hard for Larkin to believe that Shane is more serious with her, but soon they both realize that even though they could not have grown up more different they have plenty in common.

This story was such a cute and heartwarming read. Shane and Larkin have to cutest banter that kept me entertained throughout the book. They both have some difficult issues to figure out, but they for each other. They finally find the one person who they can completely open up with. This is the perfect read if you are looking for a light read. Very very adorable!