The Heir and the Spare by Emily Albright 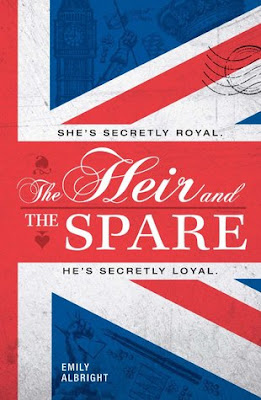 Family can be complicated. Especially when skeletons from the past pop up unexpectedly. For American Evie Gray, finding out her deceased mother had a secret identity, and not one of the caped crusader variety, was quite the surprise. Evie’s mom had a secret life before she was even born, one that involved tiaras.In this modern day fairytale, Evie is on a path to figure out who her mom really was, while discovering for herself what the future will hold. Charged with her late mother’s letters, Evie embarks on a quest into her past. The first item on the list is to attend Oxford, her mom’s alma mater. There, Evie stumbles upon a real life prince charming, Edmund Stuart the second Prince of England, who is all too happy to be the counterpart to her damsel in distress.Evie can’t resist her growing attraction to Edmund as they spend more time together trying to unravel the clues her mother left behind. But, when doubts arise as to whether or not Edmund could ever be with an untitled American, what really ends up unraveling is Evie’s heart. When Evie uncovers all the facts about her mom’s former life, she realizes her mom’s past can open doors she never dreamed possible, doors that can help her be with Edmund. But, with everything now unveiled, Evie starts to crack under the pressure of new family responsibilities and the realization that her perfect prince may want her for all the wrong reasons.

I picked up this book because it was compared to The Princess Diaries and The Prince & Me , and I love both of those storylines. I love the idea of going to Europe, falling in love with a prince, and then maybe finding out you are royalty. That just makes me feel all giddy inside. Even though this book wasn't as good as I was hoping, I still really enjoyed it! The plot of this book was great! I thought the mystery that was woven into the story was a lot of fun, and it kept the book interesting. I was disappointed that it was put to the back burner at times, but when the mystery was addressed, it was so much fun to read about.Evie was an alright main character. Evie stood up for herself and she was very loyal, which I admired. However, Evie was very childish. Evie caused drama for no good reason, got angry over little things, and overreacted to everything. I would have liked to see more character development from her. I didn't hate Evie by any means, but she wasn't the best main character. Edmund, the romantic interest, was extremely swoon worthy. He was as wonderful as I thought he would be. I really liked the cast of side characters. I thought they were all unique and added some great humor to the story. One of my favorite relationships in this book was the relationship between Evie and her father. They were so sweet together, and it was so easy to tell that they really loved each other. The romance in this book was definitely insta-love, but it was cute. I thought there were some really sweet moments between Edmund and Evie. They went on some adorable dates that made my heart flutter. However, the push and pull of their got very annoying. They had so much angst and unnecessary drama in their relationship. All they had to do was talk to each other, but they never did! If they would have actually communicated, then their drama would have been cut in half.Overall, this was a fun and quick read. I just think Evie could have done with more character development, and there should have been less drama. However, this book was still magical and adorable. I am looking forward to reading more books from this author.

Email ThisBlogThis!Share to TwitterShare to FacebookShare to Pinterest
Labels: Review Emily Albright, Recent Release, Review, The Heir and the Spare