Lines We Forget by J.E. Warren

Love never comes easy, especially to those who aren’t prepared for it…

Twenty-four-year-old musician Charlie Stone has always played the classics. It’s just another day of playing the same old songs when he notices her—Anna Garrett, a beauty with cold-bitten, rosy cheeks and a coffee cup clutched in her hands.

Five songs later, and she’s still standing there. He vows to steal her heart the only way he knows how—through the power of music.

In the heart of London, chance encounters are few and far between, but a warm melody can bring people together…

New day, same old disappointments. Anna Garrett believes her luck at finding love has stalled before it’s even started when she’s stood up for a second date with a friend of her housemate.
But when she sees a handsome musician playing his heart out, everything changes. Memories come flooding back. As she listens to the music, Anna realises she must take matters of love and luck into her own hands.

After a series of wonderful, unconventional dates, feisty Anna and hopeless romantic Charlie declare their love for each other. But their newfound bond is rocked to its core by a New Year’s Eve party gone awry that threatens to throw them off course.

Finally, a bright future appears to be within their grasp. But when Anna’s world fractures and distance comes between them, the real work begins.

Will their love go on in perfect harmony, or become another old song full of Lines We Forget? 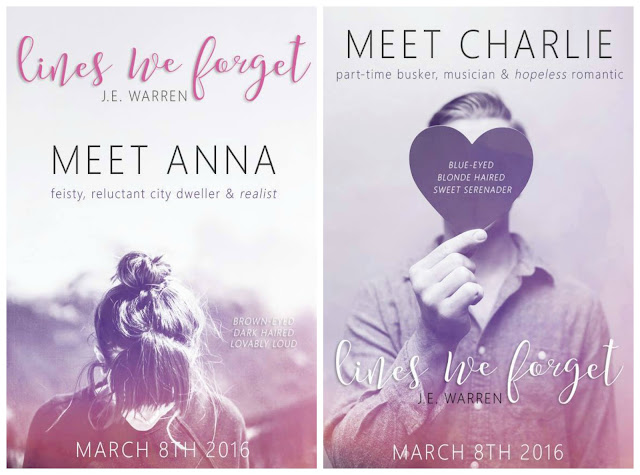 J.E.Warren currently resides in a somewhat sleepy seaside town, and is a British Romance/YA writer who has a long standing love for milky tea, travel, shaggy haired 90’s band Hanson, and small dogs.
She enjoys writing and bringing to life realistic and relatable characters, especially strong, sharp and savvy females who aren’t afraid to speak their mind.
Music has always played a big part in her life – from noisy rock to reggae, folk to pop punk and everything else in between. And is a constant source of inspiration when writing, especially when plotting new ways to steal reader’s hearts, or make them swoon (usually with the help of guitar playing heartthrobs.)
When she’s not writing, J.E likes to curate perfect playlists – of which she has many, and catch up on her favourite shows (again too many), though you can be certain to find Buffy The Vampire Slayer on heavy rotation.
“Life is too short so love the one you got.” – Sublime