All Chained Up
by Sophie Jordan 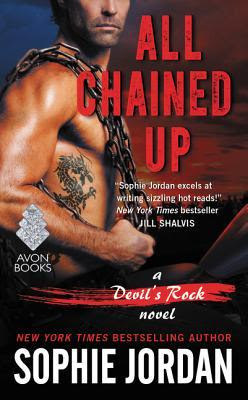 Some men come with a built-in warning label. Knox Callaghan is one of them. Danger radiates from every lean, muscled inch of him, and his deep blue eyes seem to see right through to Briar Davis’s most secret fantasies. But there’s one major problem: Briar is a nurse volunteering at the local prison, and Knox is an inmate who should be off-limits in every way.
Knox feels it too—a shocking animal magnetism that drives him to risk his own life to protect Briar’s. Paroled at last, he tries to resist her. She’s too innocent, too sweet, and she has no idea what Knox is capable of. But a single touch can lead to a kiss—and a taste . . . until the only crime is denying what feels so right . . .

"The kitten had claws. He stared at her for a moment, styling her stoic face with the faintly pink cheeks. She blinked and looked down at her laptop again, clearly flustered.

“Why are you so nervous?” he asked.

ALL CHAINED UP was fantastic. I literally finished this book in one sitting. Briar is a nurse volunteering at a prison when she meets the dangerous, convicted felon Knox. Briar immediately feels the connection and tries to keep it professional, but when tragedy strikes she’s left realizing that Knox is more than just an inmate.

After spending 8 years in prison, Knox is now on parole keeping his nose clean. When he runs into Briar at a convenience store he has no restraint. Knox knows Briar felt the same connection when they were at the prison, but he also knows he’s not good enough for her. So when thinks get too intense, Knox has to figure out what he wants before he ruins the best thing that’s happened to him since being sent to prison.

I loved everything about Briar and Knox’s story. The whole prison worker/prisoner taboo storyline was written with perfection. It captured the the dangerous and unconventional romance with realism. I really enjoyed that this story wasn’t too over the top to make it unrealistic.

The connection that Knox and Briar shared was palpable and strong. This story had a ton of hot scenes and dialogue! It also gave us a glimpse of the next book and I’m dying to read it.

I’ve never read anything by Sophie Jordan but I’m so glad I read this one, I’m definitely a permanent fan of her writing.

If you’re looking for a story that is a bit taboo, has an alpha male and is full of intense hot scenes pick up ALL CHAINED UP. It’s guaranteed to not disappoint!