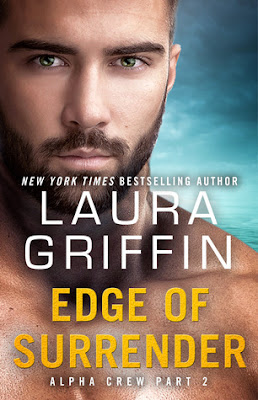 The scorching-hot romance between Emma and Ryan that began in At the Edge: Alpha Crew Part One concludes in Part Two of this sexy, suspenseful adventure!Ryan had one job: keep Emma safe at all costs. But after a night of passion, Emma takes off and Ryan soon realizes he’s not the only one looking for her. Can he figure out who’s after the beautiful government aide, and why, before she falls into the wrong hands…if she hasn’t already?Emma’s fighting to get justice for her fallen comrades, but she can’t do it alone. She needs Ryan’s help, but that means trusting him--and dealing with the out-of-control desire blazing between them. Can there be any future for a marked woman and a man trained to kill? She hopes they live long enough to find out…Don’t get spoiled! Be sure to read At the Edge: Alpha Crew Part One before devouring this sizzling romance!

After reading part I of At the Edge , I was so excited to jump into this novella. Part I left off on a crazy cliffhanger, and I was desperate to know what happened next. Part II started right where we left off. The first couple chapters of this novella was so action packed! I could legitimately feel my heart beating about a thousand miles per hour. Laura's writing had me on the edge of my seat! I was expecting the entire novella to be like that, but unfortunately, it wasn't. After the first couple chapters, I felt like this novella became a predictable romance story.

I was so disappointed by that considering how much I enjoyed the previous novella.

I love romance, but the romance didn't work for me in this novella. I really enjoyed the romance in part I, but I felt like it fell flat in this part. The romance seemed to completely take over the plot. I thought Laura did an awesome job at writing steamy scenes, but I wanted more explosive action! I would have liked to have had the steamy scenes, but not as many as there were. I wanted awesome kickbutt action with a side of romance!

I really liked seeing some more of the side characters in this novella. I would love to see even more development of those characters. There was a new woman introduced in this novella, and I totally ship her with one of Ryan's friends. I hope there will be a book about them in the future!

The big "reveal" in this book really wasn't shocking for me. I thought it was kind of obvious what was happening through out the entire novella.

I wish the big "shock" would have been less obvious. That part of the novella also felt kind of rushed. It seemed to happen so quickly! Also, some storylines had no resolution. For example, Emma's issues with her dad were never addressed. I wanted some resolution on that, but there wasn't any! I was disappointed by that.

I know I have said a lot of negative things, but I did not hate this novella. There were some really exciting parts that I loved! As I said, Laura knows how to right awesome action scenes. The romance was a bit overwhelming, but it was obvious that Emma and Ryan had some crazy chemistry. I definitely would like to read more about them, and see their relationship develop more.

Overall, I liked this novella, but it wasn't as good as I was hoping it would be. I think if part I and II of this novella would have been better as one book. It wouldn't have felt as rushed, and I think there would have been room for more development of plot lines, characters, and relationships.

*This ebook was given to me in exchange for a honest review. *
Posted by MissDaemon at 8:00 AM