It's said that your life flashes before your eyes when you die.
It must only happen to those whose lives were worthy.
Clearly, mine was not.

The only thing that happened to me was a repeat of what I thought was my death.
The blast of the gun as it went off.
The loss of my breath as two hundred pounds of dead weight dropped on top of me.
And then darkness.
This replayed over and over.

When the guy squatted down next to me and asked if I was hurt, the only thing I could see, feel,
hear, were those few seconds.
Even now, as I sat in the back of a blacked out van—it was the only thing that ran through my mind.
Gunshot, breath, darkness. 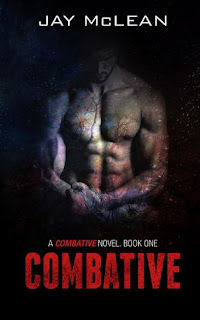 COMBATIVE ON SALE FOR 99c

"You are the only freedom I've ever known."

I'm so mad at Jay!  How can she write this book??
She made me fall in love with Nate DeLuca. LOVE HIM.  I'm just so scared the third book in this series could destroy me.

Who is Nate? You have to read Combative to know who he is. Just don't expect to really know because Jay had created an awesome anti-hero!
Nate should be someone I could just pass over....nah...He is so well written. The guy has a heart of gold under his bad guy façade. His life hasn't been easy and there is still drama to unfold. We get a glimpse into what the problems could be for him.

And then Jay, gives us Bailey. Bailey five years earlier...What a huge difference five years makes. I knew she knew more than what she was saying. It was all too suspicious for me. Very convenient moving close to Ky. But, even though I know this, I still have too many questions.

In this book, we learn how Bailey's life changed. She was at the wrong place and at the wrong time. Yet, she was not going to let them "take her". She is a fighter in her own way.

I love the connection Bailey and Nate developed. They had a very intense relationship under the worse circumstances ever!

I want Bailey with Nate. There, I said it. I hope Destructive gives me what I want and I get an answer to all my questions.

Jay McLean is an international best-selling author and full-time reader, writer of New Adult Romance, and most of all, procrastinator. When she’s not doing any of those things, she can be found running after her two little boys, playing house and binge watching Netflix. She writes what she loves to read, which are books that can make her laugh, make her hurt and make her feel.

Jay lives in the suburbs of Melbourne, Australia, in a forever half-done home where music is loud and laughter is louder.