She Dims The Stars by Amber L. Johnson 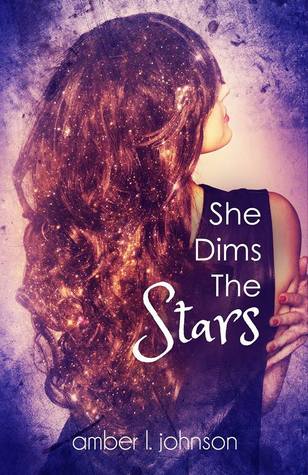 Who is Audrey Byrd?

Ask her ex-best friend, Cline Somers, and he’ll tell you that she’s the girl who inexplicably stopped talking to him when they were fifteen years old, leaving him with nothing but questions and bitterness for the better part of the next six years.

Ask his roommate, Elliot Clark, and he would say that Audrey is the enigmatic girl who randomly showed up outside a window one day and turned his whole world upside down in a matter of moments.

Ask Audrey herself and she’ll tell you that she has no idea who she is, because her entire life is a lie. However, the older she gets the more she needs answers about who she really is.

What she discovers is a tangled web of secrets better left in the dark.

Some truths do more harm than good.

***Recommended for readers 18+ due to sensitive subject matter, language and situations.

Every book of Amber Johnson's I've read has left me delightfully surprised. Puddle Jumping is still one of my favorites books ever, and I don't think I will ever read it enough times, so I was dying to get my hands on She Dims The Stars. First of all this cover is absolutely stunning! That being said lets continue...

First there's Elliot. He's recently parted with his girlfriend and now instead of going abroad with her for the summer he's stuck hanging out with his roommate. So that's what he's doing until a girl throws a rock at his roommate's bedroom window and invites them to her party. Enter, Audrey Byrd, she's pretty, and funny, and confusing as hell! What do you do with a girl who's so closed off about who she is, because all you want is to get to know her. Elliot decides to help Audrey, while helping himself as well, and soon the summer seems to be looking up, even if her ex-bestfriend Cline doesn't like it.

I fell completely in love with Elliot and Audrey! With all of Audrey's ups and downs Elliot was there for her. He comforted her and tried to make her feel like she could own the world if she tried. Audrey is trying to find her way. She has kept her past hidden and it's taken it's toll, but slowly she begins to open up with what she can. Cline was just plain rude, but I liked him either way. His past with Audrey left him raw, but he goes with it.

If you're a fan of Johnson's writing you know that her stories are on the shorter side, but pack no less of an impact. Somehow I never feel like it's been cut short or like I'm missing part of the story, this one included. I loved how there were old relationships being repaired, while new ones were being born. She Dims The Stars is a very well written story that tugged at my heartstrings, and had me rooting for these characters to get their happy!

Posted by MrsJZBarrons at 12:32 PM