Lions in the Garden (The Uprising #1)
by Chelsea Luna 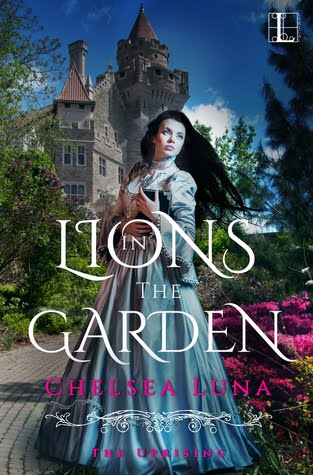 Prague, 1610Ludmila Novakova--Mila--has barely set foot outside Prague Castle in her seventeen years. But with the choice between braving the bandits and wolves of Bohemia's uneasy roads or being married off to a disgusting old baron, she's taken what she can carry and fled. Escape won't be easy. Even Mila has heard the rumors of a rebellion coming against the court. The peasants are hungry. The king hasn't been seen in months. Mila's father, the High Chancellor, is well known and well hated. But Mila can't sit behind a stone wall and let fear force her into a life of silk gowns and certain misery. Her mother's death has taught her that much. She has one ally: Marc, the son of the blacksmith. A commoner, a Protestant--and perhaps a traitor, too. But the farther she gets from the castle, the more lies she uncovers, unraveling everything she thought she knew. And the harder it is to tell friend from enemy--and wrong from right . . .

This book was so hard to rate. There were things I really enjoyed about this book, but there were also things that I really didn't like at all.

What I did love about this book was the time period and the setting. I thought it was so cool to read about a book set in Prague. The author did a great job at describing the settings of the castles and surrounding areas during the 1600s. I also loved reading about the outfits Mila got to wear. I personally love ballgowns, and Mila got to wear so many of them! It made me giddy just reading about the beautiful dresses she had.

I thought the basic plot of the book was really interesting, however, I felt like the plot of the book got overshadowed by the romance. Don't get me wrong, I love romance, but I felt like the romance in this book took away from excitement of the plot. I think the reason the romance felt that way was because it was insta-love. I would have preferred the romance to develop at a slower pace. Instead, it felt rushed and unrealistic. I just really didn't buy the romance. I will say that Mila and Marc had some cute moments, and Marc definitely made me swoon a few times. However, it was hard for me to look past the insta-love. I hope the next book in the series will develop their romance more.

Now, let's talk about Mila. To be honest, she was a bit of a ditz. She did/said so many idiotic things in this book and it drove me insane. One of the best examples of this was when she tried escaping in the very beginning of the book. When she escaped, she decided to wear her expensive hair pieces and an elegant dress that would clearly define her as higher class/nobility...

If she didn't want to get caught or noticed, she shouldn't have worn that! It was obvious that someone was going to spot her attire and find that a bit suspicious. She did that and a few other things in the book that had me shaking my head at her. However, I did like how kind and thoughtful she was. I definitely respected that about her.

Even though there were things I disliked about the book, I still enjoyed myself while reading the book. I felt like I was reading a story about a new Disney princess. It was kind of cheesy and it eye-roll worthy, but still fun and light hearted. I would definitely pick up the sequel to see what happens next. I could see my younger sister LOVING this book!