Somewhere Out There by Amy Hatvany 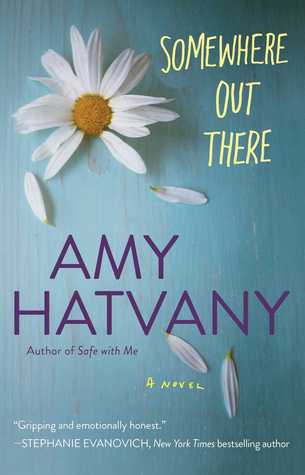 Natalie Clark knew never to ask her sensitive adoptive mother questions about her past. She doesn’t even know her birth mother’s name—only that the young woman signed parental rights over to the state when Natalie was a baby. Now Natalie’s own daughter must complete a family tree project for school, and Natalie is determined to unearth the truth about her roots.

Brooke Walker doesn’t have a family. At least, that’s what she tells herself after being separated from her mother and her little sister at age four. Having grown up in a state facility and countless foster homes, Brooke survives the only way she knows how, by relying on herself. So when she discovers she’s pregnant, Brooke faces a heart-wrenching decision: give up her baby or raise the child completely on her own. Scared and confused, she feels lost until a surprise encounter gives her hope for the future.

How do our early experiences—the subtle and the traumatic—define us as adults? How do we build relationships when we’ve been deprived of real connection? Critically acclaimed author Amy Hatvany considers controversial and complicated questions about childhood through the lens of her finely crafted characters in this astute novel about mending wounds by diving into the truth of what first tore us apart.

Jennifer Walker had made so many mistakes even before she was twenty-one. She was pregnant by eighteen and her mother wanted nothing to do with her or her child. She did things she regretted and on the night she went to prison, she lost her two baby girls in a blink of an eye.

Natalie and Brooke grew up in different environments. Separated as children, Natalie was adopted while Brooke stayed in the foster care system and the state facility until she was eighteen.

Now both grownup in their late thirties, they'll be reunited.

Natalie Clark is married with two children, she was a lawyer until she decided that's not what she wanted to do in life.  Instead, she opened her own catering service for sweets called Just Desserts. She is slowly building a steady clientele. She learned she was adopted when she was ten but she never knew she had an older sister until now. She begins a search for her sister and birth mother.

Brooke Walker learned not to open her heart again. She learned this from her mother after she abandoned them when she was just four years old. For years, she waited for her mother to return, to save her. The one time she let someone in, she was left heartbroken again. Brooke has been a waitress all her life and she has supporting herself the best way she could. Getting pregnant to a married man was not what she was hoping for.  Meeting her sister again, even less.

Very moving story. It makes you wonder, how a wrong decision or a few of them can change the course of a life or in this case, lives.

I felt unable to be upset with Jennifer. She was too young, didn't know any better. The mother who should have supported her, kicked her out, the man she fell in love with, wanted nothing to do with her or her nine-month daughter. Her time in prison was so sad and I was happy she found a silver lining at the end.

Natalie had a good life with her adoptive family. She was doing what she wanted to do. She was in love with her husband and she had two cute kids. She knew she was missing something and getting Brooke in her life made her fill that emptiness.

Brooke was the one who had it the worst. She was not as lucky as Natalie. She remembered her mother. She remembered things no kid should. She had no one growing up. She never fell in love and now she was facing a pregnancy in her late thirties with no support until Natalie was there to help her.

Email ThisBlogThis!Share to TwitterShare to FacebookShare to Pinterest
Labels: Review Amy Hatvany, Review, Somewhere Out There