Nobody But You Jill Shalvis 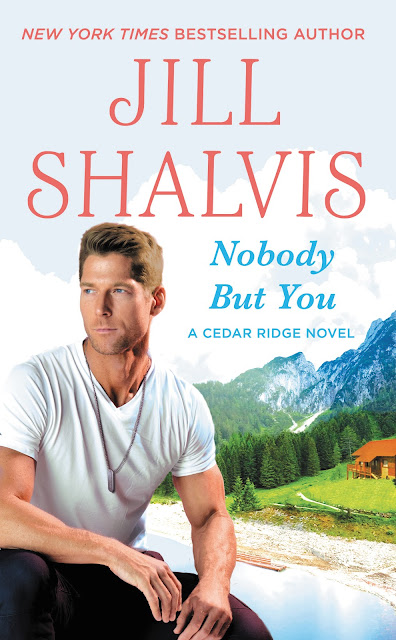 SOMETIMES YOU CAN GO HOME AGAIN…

When Jacob was injured in the war, it changed him for life. Now all he wants to do is come home to Cedar Ridge, settle in at his lakeside cabin and get some much-needed peace and quiet. But there's no peace to be had when he finds a spitfire of a woman camping out on his property. Half the time he's not sure whether he wants to spank her or kiss--or maybe both. He's in a dark place and a dark mood, and here's this wildly hot woman who is also funny and light and may be the balm be needs to soothe his aching soul.

Sophie Marren is pretty much penniless after leaving her abusive husband. She doesn't have the money to pay rent or the slip fees for docking the boat where she's been sleeping. She was getting along just perfectly until the good-looking, brooding, I'm-too-sexy-for-myself guy moves into the lake cabin that the slip belongs to. Sure he's hot as the noon sun with those dark lens and even darker 'tude, but god forbid she tie herself to another man who's always telling her what to do. But the more she gets to know Jacob, the more she sees how willing he is to battle for her wounded heart...a battle she might just let him win.

This is the story of Jacob Kincaid.

If you have read the rest of the series, you know the Kincaid are a family of siblings who have different mothers but same "sperm donor" father. Only Jacob and Hudson who are twins have the same parents.  Hudson had his love story in My Kind of Wonderful.

Jacob has been absent from Cedar Ridge for years. As soon as he turned eighteen he was on the run, joined the military and has been deployed for a while. His parting was after he and Hudson had a fight.  Jacob knows he made a mistake and he's back while on leave to make amends to his family and his sick mother. The last thing he was expecting was to find a boat mooring at the cabin's dock he's renting.

Sophie Marren lost everything in the divorce except she took the one thing her ex-husband loved more than anything else, his boat. Sophie's husband is a lawyer, he's also unfaithful and a liar. If Sophie ever falls in love again, it would be with a man who won't lie to her. In the meantime, she is living in the boat and working with a temp agency to find out what she wants to do in life. Meeting a handsome brooding quiet guy was not in her plans.

I believe Jacob and Sophie met at the right time. He knew he had to atone for his mistakes and that the exchange he and Hud had years ago, was nothing that words said in anger. He also recognized he liked the way Sophie was with him. He was ready to move forward.
Another point to Jacob was how sweet he was with his mother and sister.

Sophie was funny, smart but also damaged. She spent her married life trying to make someone happy and failing. She was scared of getting hurt which I totally understood. She wanted to be independent and make something of herself after losing her self-esteem while married. Jacob was good for her in more ways than one.

I love how these damaged souls found each other bringing light into their darkness.

This is the third book in the Cedar Ridge series. I haven't read the first two books in the series, but reading Nobody But You I didn't feel like I was missing anything. Jacob is part of the Kincaid family and is back in town trying to mend his broken family relationships. He's been serving in the military for the past nine years and is on leave. I loved him from the very beginning! I always have a soft spot for military men! They are men of few words, but when they do speak their words pack a punch and that was definitely Jacob Kincaid.

Jacob and Sophie meet and have an instant attraction although she fights it initially because she's quitting men. Why is she quitting men? Because her scumbag ex of course! Sophie cracks me up! She's always having some sort of internal conversation with herself. She has a wildfire inside her that Jacob seems to set loose whenever he's around. I cannot gush about him enough! If I were a cartoon character you would have seen hearts floating around my head while I was reading this!

'...You're going to get more than you bargained for. Remember, every good thing that's ever come into your life has cost you in blood, sweat, or tears...

Jacob pulled back, a brow raised.

They are just so cute together! Both are dealing with some very tough issues. Sophie is trying to find herself after being in a loveless marriage, and Jacob is trying to find himself in a way too. Even though neither one of them is looking for love they both seem to be there for each other.

This was truly a great story about dealing with loss, mending broken relationships, finding love, breaking old patterns, and moving on. So many life lessons are wrapped into one funny and emotional story. I am now a huge fan on Jill Shalvis and am stoked for Aidan Kincaid's story in Second Chance Summer.

She eyed the bench a long beat but did eventually sit, perching primly as far from him as she could get and yet still be close enough to grab the bottle.

She took the Scotch and drank. Her eyes watered and she coughed as she handed it to him. With a sigh, she leaned back to study the night sky. Her bared throat was slim and creamy smooth. An unexpected temptation. Remembering the flash of pain and vulnerability she’d unwittingly revealed, and that for whatever reason he’d somehow added to it, he spoke. “I’m sorry.”

She glanced at him as if she’d never heard a man apologize before in her life. “For…breathing?” she asked. “Having a penis? What?”

“You were upset because you didn’t know I was a Kincaid.”

She sighed. “That was just me looking for a reason to be mad at you so I wouldn’t…”

She bit her lower lip, clearly not wanting to go on.

But now he had to know. “So you wouldn’t what?”

“Nothing,” she said. “It’s just that I’m trying to make better choices.”

“It’s not necessarily your fault,” she said. “It’s that you’re a man.”

“And on…women?” he asked with admittedly more than a little fascination.

She rolled her eyes. “I’m on no one, but thank you for proving my point on men.”

“I get that,” he said. “But being off men doesn’t seem to be making you very happy, or sound like a whole lot of fun.”

He understood that. He’d felt the same way since Brett died. “What do you need?” he asked, honestly wanting to know more about her.

Instead of answering, she reached for the bottle. He waited until she met his gaze before letting go.
“Nothing,” she said a little too quickly. “Everything’s…perfect.”

But he didn’t believe her. “How about a game?”

Now, that wasn’t exactly true. Whether she knew it or not, she’d been playing with  his head since he’d first laid eyes on her. “Three truths and a lie,” he said.

She stared at him. “As in you tell me three truths and a lie, and I pick out the lie?”

She considered this. “What do I get if I win?”

For the briefest of beats, her gaze dropped to his mouth.

“My first boyfriend taught me that game,” she said.

“What did the winner get?”

Definitely still playing with his head… “Is that what you want, Sophie? A kiss?”

Again she stared at his mouth before dropping eye contact and wrapping that eye-stopping pink robe tighter around her body. “Do you?” she asked.

Her gaze flew to his.

“Problem is,” he said conversationally, “if I kissed you, I don’t think I’d be able to stop.”

Her mouth literally fell open. The pulse at the base of her throat jumped. And she seemed to lose her words.

He went on. “But you should know, I don’t lose. That means you’ll have to tell me three truths and a lie.” And he’d hopefully get to know more about her.
She closed her mouth to bite her lower lip in what could’ve been indecision or excitement. Obviously he was hoping for the latter. “But hey, if you’re not sure you can handle losing, we can just forget about it,” he said.

The challenge lifted her chin and put sparks in her eyes. That’s it, babe. Show me what you’ve got.

New York Times bestselling author Jill Shalvis lives in a small town in the Sierras full of quirky characters. Any resemblance to the quirky characters in her books is, um, mostly coincidental. Look for Jill's bestselling, award-winning books wherever romances are sold and visit her website for a complete book list and daily blog detailing her city-girl-living-in-the-mountains adventures.

Email ThisBlogThis!Share to TwitterShare to FacebookShare to Pinterest
Labels: Review Cedar Ridge, Jill Shalvis, Nobody But You