The Almost Girl by Amalie Howard

THE ALMOST GIRL BY AMALIE HOWARD IS LIVE! 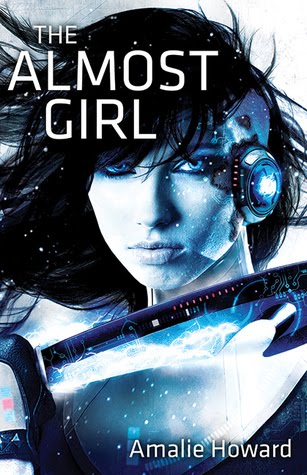 17 year-old Riven comes from a world ravaged by a devastating android war, a parallel world to Earth. A Legion General, she is the right hand of the young Prince of Neospes. In Neospes, she has everything: rank, responsibility and respect. But when Prince Cale sends her away to find his long-lost brother, Caden, who has been spirited back to modern day Earth, Riven finds herself in uncharted territory. Thrown out of her comfort zone but with the mindset of a soldier and in a race against time to bring Caden home, Riven has to learn how to be a girl in a realm that is the opposite of what she knows. Will Riven be able to find the strength to defy her very nature? Or will she become the monstrous soldier she was designed to be?

PRAISE FOR THE ALMOST GIRL:


“A high-octane thriller. SF and dystopia fans will be right at home with this book and its fierce, capable heroine.” ~ Publishers Weekly

“The Almost Girl is a feminist tour de force. It is filled with powerful, interesting female characters. Riven is one of my favorite fictional characters ever; she is fierce, passionate, funny and smart. This sexy, fast-paced story is impossible to put down. A must read! Fans of Divergent will love it!“ ~ Kim Purcell, author of Trafficked

“A riveting union of science fiction thriller, romance, family drama, and conspiracy theory, The Almost Girl had me wishing I could crawl inside the pages and join Riven on her epic journey between parallel worlds. Amalie Howard’s writing is sharp and smart. I’m definitely craving the next installment!” ~ Page Morgan, author of The Beautiful & The Cursed

AMALIE HOWARD grew up on a small Caribbean island (Trinidad & Tobago) where she spent most of her childhood with her nose buried in a book or running around barefoot, shimmying up mango trees and dreaming of adventure. 25 countries, surfing with sharks and several tattoos later, she has traded in bungee jumping in China for writing the adventures she imagines instead. She isn’t entirely convinced which takes more guts. An aspiring writer from a young age, Amalie’s poem “The Candle,” written at age twelve, was published in a University of Warwick journal. At fifteen, she was a recipient of a Royal Commonwealth Society Essay Award (a global youth writing competition). A Colby College graduate, she completed simultaneous Honors Theses in both French and International Studies, and graduated Summa Cum Laude/Phi Beta Kappa. At Colby, she was cited for research and criticism in Raffael Scheck’s article, “German Conservatism and Female Political Activism in the Early Weimar Republic,” and his subsequent book, Mothers of the Nation. She also received a distinction in English Literature from the University of Cambridge (A-levels) as well as a certificate in French Literature from the Ecole Normale Supérieure in Paris, France. Traveling the globe, she has worked as a research assistant, marketing representative, teen speaker and global sales executive.

She is the author of several young adult novels critically acclaimed by Kirkus, Publishers Weekly, VOYA, and Booklist, including Waterfell, The Almost Girl, and Alpha Goddess, a Spring 2014 Kid’s INDIE NEXT title. Her debut novel, Bloodspell, was a #1 Amazon bestseller and a Seventeen Magazine Summer Read. She is also the co-author of the adult historical romance series, THE LORDS OF ESSEX. As an author of color and a proud supporter of diversity in fiction, her articles on multicultural fiction have appeared in The Portland Book Review and on the popular Diversity in YA blog. She currently resides in Colorado with her husband and three children.