Marked in Flesh (The Others, #4) by Anne Bishop 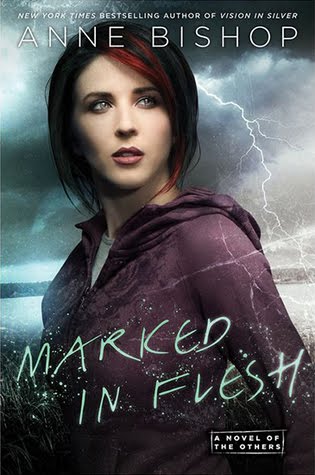 For centuries, the Others and humans have lived side by side in uneasy peace. But when humankind oversteps its bounds, the Others will have to decide how much humanity they’re willing to tolerate—both within themselves and within their community...

Since the Others allied themselves with the cassandra sangue, the fragile yet powerful human blood prophets who were being exploited by their own kind, the delicate dynamic between humans and Others changed. Some, like Simon Wolfgard, wolf shifter and leader of the Lakeside Courtyard, and blood prophet Meg Corbyn, see the new, closer companionship as beneficial—both personally and practically.

But not everyone is convinced. A group of radical humans is seeking to usurp land through a series of violent attacks on the Others. What they don’t realize is that there are older and more dangerous forces than shifters and vampires protecting the land that belongs to the Others—and those forces are willing to do whatever is necessary to protect what is theirs…

This book was just as interesting and addictive as I was hoping it would be. What was so interesting about this book was that we got to see beyond the Courtyard. I thought that added an interesting aspect to the plot. There wasn't a lot of action in this book, but I think the overarching plot of this series developed a lot more. I thought it was great to see Meg learn more about the blood prophets and come up ways to try to help all of the blood prophets. I hope to see more of that in the next book.

I loved the relationships between all the characters in the Courtyard. It was easy to tell that they all care about each other, and I loved seeing displayed more in this book.


The main thing that bugged me about this book was Meg and Simon did not get a lot of POV chapters. The lack of their POVs took away some enjoyment for me. It shouldn't have bothered me, but it did! I just wanted more Meg and Simon. They make my heart ache in the most beautiful way.


The romance between Meg and Simon was still a very slow burn, but I ate it up. The way Anne writes their romance is so endearing and perfect. I wanted them to be around each other, talk to each other, and think about each other at all times. I am obsessed with their relationship. The few moments they had together in this book were amazing. I ship them SO HARD. SO SO HARD. The last scene between Meg and Simon left me dying for the next book.

Overall, this book was a great addition to the series. Anne Bishop never disappoints with her books. I recommend this series to anyone who is looking for a great urban fantasy series!