At the Edge: Alpha Crew Part I (Alpha Crew #1)
by Laura Griffin 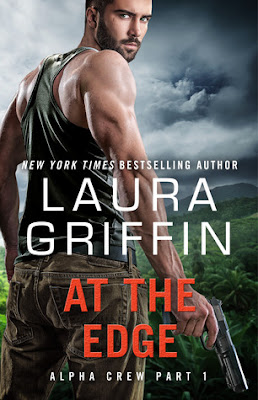 Dive into Part One of this heart-pounding romantic suspense story, which continues in Edge of Surrender: Alpha Crew Part Two!

When Emma Wright’s government plane goes down over the Philippine jungle, she’s forced to survive alone until an ultra-elite SEAL team goes in after her. As the leader of Alpha Crew, Ryan Owen is no stranger to challenges, but he’s never tackled anything quite like this sexy, smart, and resourceful woman. The mission is to get Emma home safely, but danger is everywhere, and Ryan’s unexpected desire for Emma could be a deadly distraction.

Back home in California, Ryan’s mission is over—but Emma’s has just begun. She knows her plane crash was no accident, and she’s determined to uncover the truth about what happened—even if her quest for answers puts her at risk. Torn between duty and desire, Ryan searches for a way win Emma’s heart while protecting her from an invisible enemy who wants her dead.

If you are looking for a book that has non-stop action and super steamy moments, then this is the perfect book for you. Actually, it is more of a novella than a book, because it is so short! I wish this would have just been one book, because it is annoying that I have to wait for part II. I would have rather had it been one book instead of two novellas. This part ended on a big cliffhanger, so I am DYING to read what happens next.What I loved about this book was the action. I felt like I was constantly on the edge of my seat. It honestly felt like I was reading an action movie in book form. Laura knows how to write an exciting novel! The only issue I had with the plot of the book was that I wish the first "part" of this novella would have been longer. I would have liked to see a little bit more of the rescue mission, but that was the only issue I really had with the plot of the book.I really liked the main female character of this book, Emma. I thought she was strong, smart, kind, and hilarious. I think the author did a great job at making her a character I could relate to, but also look up to. The main male character was Ryan, and he was awesome. He was the perfect alpha male. I fell for him instantly. I cannot wait to see more of him in part II.

The romance in this book could possibly been seen as insta-love, but I think it was more insta-lust. Ryan and Emma definitely had sparks right from the beginning, and it lead to some very steamy moments. I liked that the romance was prominent in this book, but it wasn't the entire plot. The romance was just an awesome bonus to the action packed plot. The only thing I did not like about the romance was the one steamy scene in this book. In one of the scenes, Emma basically forced herself on Ryan. I know he wanted to get "personal" with her, but he didn't want to at that exact moment. It was just strange because it felt like Emma was forcing him to do something he didn't want to do. Overall, I really enjoyed this novella. It was sexy and extremely exciting. I cannot wait to read part two so I can see what happens after that crazy cliffhanger!4 / 5 Fangs*This ebook was given to me in exchange for a honest review. *