Their Fractured Light (Starbound #3)
by Amie Kaufman and Meagan Spooner 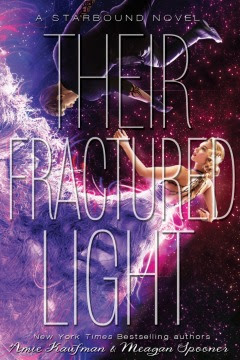 A year ago, Flynn Cormac and Jubilee Chase made the now infamous Avon Broadcast, calling on the galaxy to witness for their planet, and protect them from destruction. Some say Flynn’s a madman, others whisper about conspiracies. Nobody knows the truth. A year before that, Tarver Merendsen and Lilac LaRoux were rescued from a terrible shipwreck—now, they live a public life in front of the cameras, and a secret life away from the world’s gaze.Now, in the center of the universe on the planet of Corinth, all four are about to collide with two new players, who will bring the fight against LaRoux Industries to a head. Gideon Marchant is an eighteen-year-old computer hacker—a whiz kid and an urban warrior. He’ll climb, abseil and worm his way past the best security measures to pull off onsite hacks that others don’t dare touch.Sofia Quinn has a killer smile, and by the time you’re done noticing it, she’s got you offering up your wallet, your car, and anything else she desires. She holds LaRoux Industries responsible for the mysterious death of her father and is out for revenge at any cost.When a LaRoux Industries security breach interrupts Gideon and Sofia’s separate attempts to infiltrate their headquarters, they’re forced to work together to escape. Each of them has their own reason for wanting to take down LaRoux Industries, and neither trusts the other. But working together might be the best chance they have to expose the secrets LRI is so desperate to hide.

I actually think this book was my favorite out of the entire series. The authors wrapped up this series beautifully with this book. I loved seeing all of the storylines tie together for this explosive conclusion. I was addicted to this book from the first page! This book gripped me the entire time. The plot of this book was so exciting and intriguing. There was nonstop action and mystery. The plot twists were shocking, and I could never predict what was going to happen next. I was constantly on the edge of my seat while reading this book. I also loved the world building in this story and in this series all together. I found this sci-fi world fascinating and well developed. I was so excited to see the characters from the previous books. My heart was full of joy to see my favorite couples interact again. I also loved the new couple that was introduced in this book. They were just as adorable as the other couples. The romance in this book was just spectacular. Every romantic moment, even if it was just a brushing of hands, was magical.

Through out these books, I have grown to care for all of the characters. Tarver, Lilac, Flynn, Jubilee, Gideon, and Sofia are all so unique and lovable. This book made me realize how much truly adored these characters. Overall, I absolutely loved this book. The authors blew my expectations out of the water with this book. This was the perfect way to wrap up this series. However, I would still love to read more books about these characters and this world. I am so sad that this series is over, but I am so happy that this series exists.