The Friends We Keep by Susan Mallery 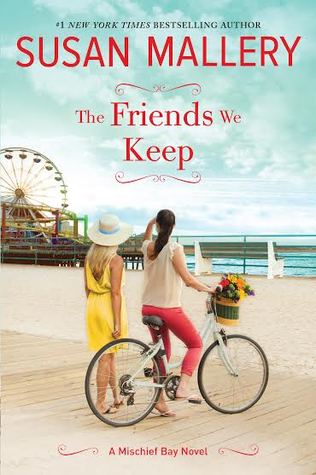 In this insightful and compelling story from book club favorite Susan Mallery, three close friends test the boundaries of how much a woman can give before she has nothing left.

After five years as a stay-at-home mom, Gabby Schaefer can't wait to return to work. Oh, to use the bathroom in peace! No twins clamoring at the door, no husband barging in, no stepdaughter throwing a tantrum. But when her plans are derailed by some shocking news and her husband's crushing expectations, Gabby must fight for the right to have a life of her own.

Getting pregnant is easy for Hayley Batchelor. Staying pregnant is the hard part. Her husband is worried about the expensive fertility treatments and frantic about the threat to her health. But to Hayley, a woman who was born to be a mom should risk everything to fulfill her destiny—no matter how high the cost.

Nicole Lord is still shell-shocked by a divorce that wasn't as painful as it should've been. Other than the son they share, her ex-husband left barely a ripple in her life. A great new guy tempts her to believe maybe the second time's the charm…but how can she trust herself to recognize true love?

As their bonds of friendship deepen against the beautiful backdrop of Mischief Bay, Gabby, Hayley and Nicole will rely on good food, good wine and especially each other to navigate life's toughest changes.

I start by saying I love anything Susan Mallery writes and The Friends We Keep was nothing but another success. To me, it felt more like a Woman's Fiction more than Contemporary Romance.

The story centers on Mischief bay and three women who are friends: Hayley, Nicole, and Gabby.

Gabby is married and has 2 twins. She is Andrew's second wife. Andrew has a daughter from his prior marriage. Andrew and his ex-wife don't get along, giving Andrew and Gaby sole custody of his daughter with some weekends spent with the ex-wife. However, Gabby is not allowed to assign her chores or punish her in any way. Only Andrew can.

Nicole is divorced. Her dream of becoming a dancer was just a dream. She has one son. Her son is obsessed with a certain book character and meeting the writer is the only thing he wants. Nicole is tired of Brad the dragon but for her son, she will do anything.

Hayley wants to have a baby of her own. She is adopted and she has some resentment towards her parents treatment of her in comparison to their biological daughter. However, after many miscarriages her options are limited and it has put a strain on her marriage.


These 3 women go through so many ups and downs. The story deals with the second wife syndrome, adoption, dating after a divorce, infertility. I felt the frustration, fear, and sadness each of the main characters.

I felt for Gabby's dilemma. To say I didn't want to scream at Andrew would be a lie. To me, he was condescending towards Gabby. I'm not sure how she let it go for 5 years.

Nicole's story was my favorite. She found love with the last person she thought she would.

Hayley's story was the most painful. She was devastated by the many miscarriages she had and she didn't want to give up. She almost lost everything in the blink of an eye.

I love the ending. It gave me just enough insight to know they were all good.