Flirting with Fame by Samantha Joyce 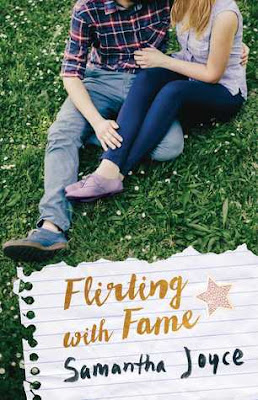 Elise Jameson is the secret author behind the bestselling, cult hit Viking Moon series. But when a stranger poses as Elise, the painfully shy, deaf nineteen-year-old starts to see how much she’s missing. Can she really hide in the shadows forever? This clever, coming-of-age debut is for anyone who has ever felt unsure in their own skin.

After a freak childhood accident leaves her deaf and physically scarred, nineteen-year-old Elise Jameson retreats into a world of vibrant characters she creates on her laptop. She is shocked when her coping mechanism turns into a career as a phenomenal bestselling novelist. Fans are obsessed with Elise’s Viking Moon series and its author—a striking girl with zero resemblance to Elise who appears on the back covers. Elise sent the randomly Googled photo to her editor following a minor panic attack. Now, horrified to learn she is expected on set of the television pilot based on her novels, Elise tracks down her anonymous stand-in. To Elise’s surprise, Veronica Wilde has been taking credit for Viking Moon for years. She eagerly agrees to keep up the charade if Elise will pose as her assistant.

It’s hard for Elise to watch a stranger take credit for her work and get all the perks she desires, including admiration from the show’s heartthrob star. Edged onto the sidelines of her own life, Elise reconsiders her choice to stay anonymous. Is she ready to come to terms with her true identity—and with the long-buried secrets that could cost her her career, her fans, and the few precious friendships she’s made?

What other authors are saying:

"A charming story of learning to embrace and love those things about ourselves that set us apart from others. I don’t think I stopped smiling once throughout Elise's journey except during the moments that squeezed painfully at my chest."
- Molly McAdams, New York Times bestselling author of To the Stars

"With a sprinkle of book fandom and dash of yummy romance, Flirting with Fame is the perfect story for every book lover."
- USA Today bestselling author, Tiffany King

"A sweet and poignant story about finding yourself and falling in love along the way, Flirting with Fame will steal your heart."
-Chanel Cleeton, author of Flirting with Scandal

"We don't get many chances to live this life. Make sure the one you're livin' is your own."

Elise Jameson is a nineteen-year-old girl. She's starting college but she is completely terrified of doing it. When she was younger, she was in an accident which left her deaf and with visible scars on her body and face. Elise became almost a reclusive. While dealing with the aftermath of her accident, Elise threw herself into writing. She wrote three books and published them under a pen name. She also used someone else's photo for her author picture. To her surprise, her books became an overnight success, with so many loyal fans and with the show pilot soon to begin shooting. Elise freaks out when her agent sends her an email telling her that they want her input during filming and that the lead actor is Gavin Hartley, who Elise has a crush on. In her desperation, Elise tracks down the girl she took the picture of (Veronica) and offers her a deal.
Meeting Gavin is nothing like Elise thought it would be. Despite being the current heartthrob with women in love with him all over the world, Gavin is nothing but nice to Elise.

This story had a lot of interesting characters.

I liked Elise from the very beginning. She was just a young girl who was shy and was self-conscious about her appearance. I didn't particularly agree with all of Elise's decisions but I understood why she tried to hide from the world. She made mistakes but she was not scared to apologize for them.
Jin and Cowboy were both incredible secondary characters. They both were great friends to Elise and they accepted her just as she was. Flaws and all.

Reggie turned out to be a good friend and I couldn't stop smiling when she was describing her favorite author and book series.  I can recognize a fangirl when I see one.
As for Veronica, she was really not a nice person. She was so bitter and mean. I do wonder what made her that way.

Overall, I was very pleased I read Flirting with Fame. It had romance, coming of age situations and great secondary characters.


"Nice screen saver, he signed.
Must be a virus, I signed back.
A virus that puts a half-naked picture of me on your desktop?
Yeah, it's going around."

I was in the mood for a light and fluffy romance, and this book was exactly what I was looking for. This story was a coming of age story mixed with cute romance, great messages, and strong friendships. Even though some of the events in this book were a bit cliche, it was still a fun book.I really liked the main character, Elise, because she was sweet and adorable. However, she did some really dumb things, but at least she always owned up to it. I wanted to shake her for doing those dumb things, but I was glad that she realized how dumb she was being. I just wish Elise wouldn't have made as many stupid decisions as she did, because it lead to some unnecessary drama. I felt bad so for Elise, and I really sympathized with her. She went through some tough things in her life that really scared her. I was glad that those issue were addressed in the book. It was nice to see her learn from those things, accept them, and become a stronger person.Elise had a great group of friends by her side, and I loved them all! Jin, Reggie, and Clint were a diverse set of characters that added a lot of humor and warmth to the story. I liked seeing Elise's friendships with each of them. I thought it was great how they always supported Elise throughout the book, even though they got into some fights along the way.The romance in this book did feel a little like insta-love. I didn't really feel the connection at first. I thought it was a little bit too sudden. However, I thought Gavin and Elise had some really cute moments together. Gavin was so understanding and supportive of Elise. I loved how he made her a more confident person and showed her that she is perfect the way she is. They had a cute and fluffy romance, even if it was a little rushed in the beginning.I thought this was a fun and a light romance that ended up being really enjoyable.I loved the message about loving yourself! For being a debut novel, I think Joyce hit this out of the park.

Flirting With Fame is one of those books that I had no intention of reading but as soon as I read the synopsis I couldn't not read it.

Elise is going through a lot, she and her best friend are starting their freshman year of college in different schools, that isn't very uncommon right? What is uncommon though is having to start college and also having to be on set for filming the television show based on her very own book series. Once Elise finds out she is being impersonated by the person she put on the back of her books she comes up with a plan she thinks will help her. The only problem with that is that things don't always go how we want them, especially when having to lie to friends.

When I got to the meeting of Veronica I was so upset that I almost stopped reading the book all together. I despised her right away, but I decided not to let Veronica get the best of my feelings and kept reading. I'm so glad I did because I feel in love with the characters. Clint was probably my favorite character of the bunch! He had so much personality I just couldn't stop my from smiling whenever he had page time.

After hiding from most people for years Elise is finally discovering who she is and what she wants out of life. This story had such an inspiring message behind it.