The Allure of Julian Lefray by R.S. Grey 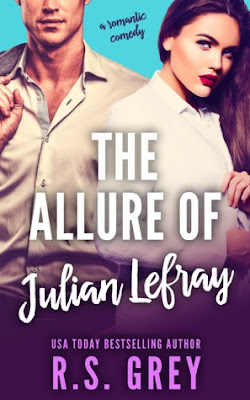 Lily, you predictable perv. I knew you’d open this email faster if I tempted you with a glimpse of JT's “PP”. Well, put your pants back on and grab some bubbly because I have much better news to share.

As of tomorrow, I’ll be the new executive assistant at Lorena Lefray Designs. I am SO excited, but there’s one itty bitty problem: I won’t be Lorena’s assistant. I’ll be working for her older brother, Julian.

I know what you're thinking- "But Jo, what’s the problem?"

Google him. Now. He’s the man in the fitted navy suit whose face reminds you that there’s hope yet for this cruel, ugly world. Keep scrolling…Do you see those dimples? Yup. That’s the Julian Lefray I will be reporting to tomorrow morning.

I think I just found my new favorite author!

The Allure of Julian Lefray was the perfect romantic comedy.

Josephine Keller has moved from Texas to NYC. She is hoping to be noticed in the fashion world. Since she was a kid she has always loved designer clothes. She has a small blog where she discusses fashion and she hopes to make a name for herself. Her first stop: to get a job as the assistant of Lorena Lefray. As luck would have it, Lorena is unavailable and her brother has taken over. One word to describe Julian: Dangerous!

“JESUS CHRIST. He smelled divine, like he’d spent the morning in the woods building me a log cabin. I hated him.”

Julian moved from Boston to NYC to help his sister. He owns 49% of the business but he is stepping in to improve it. Hiring an assistant is necessary. He wasn’t expecting funny, smart and hot Jo to show up. He would not admit he wants to hire her because he is attracted to her. In the end, she gets the job and keeping his hands to himself is turning out to be impossible.

I love the humor of this love story. The main characters complement each other to a T.
Jo wanted to succeed and I was pleased that she made certain Julian knew how important her job and her dreams were to her.  I like how Julian was supportive of his sister. He took over to relieve her from the extra stress of the business while she was trying to regain her health. He also had great camaraderie with his buddy Dean (who has a book I need to read yesterday). He was beyond charming and sweet. Hard to resist.

I can’t say enough how much I like this book. I want the movie....

“Did he have to act like my perfect soul mate?”

Email ThisBlogThis!Share to TwitterShare to FacebookShare to Pinterest
Labels: Review The Allure of Julian Lefray (The Allure #1) by R.S. Grey