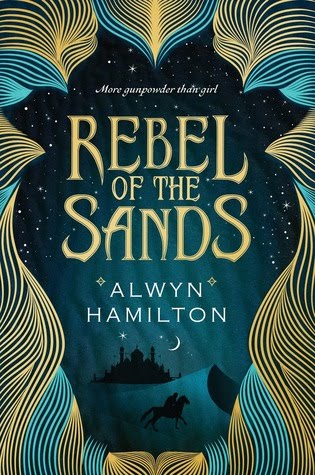 She’s more gunpowder than girl—and the fate of the desert lies in her hands.Mortals rule the desert nation of Miraji, but mystical beasts still roam the wild and barren wastes, and rumor has it that somewhere, djinni still practice their magic. But there's nothing mystical or magical about Dustwalk, the dead-end town that Amani can't wait to escape from. Destined to wind up "wed or dead," Amani’s counting on her sharpshooting skills to get her out of Dustwalk. When she meets Jin, a mysterious and devastatingly handsome foreigner, in a shooting contest, she figures he’s the perfect escape route. But in all her years spent dreaming of leaving home, she never imagined she'd gallop away on a mythical horse, fleeing the murderous Sultan's army, with a fugitive who's wanted for treason. And she'd never have predicted she'd fall in love with him...or that he'd help her unlock the powerful truth of who she really is.

In this book, Amani finds herself getting quite the reputation. People start saying she is "more gunpowder than girl".

Inspired by Amani, I asked myself "what is my blogger reputation?"

When expressing my feelings for a book, I love using gifs! I think they are such a fun way to visually express emotions. I always use gifs in my reviews. I have no shame.

As for using all caps, it is a habit I have formed recently. When I want to really emphasis something, I typically type in all caps! I usually use all caps when I am fangirling about how much I love a book.

Do you have a have a blogger/reading reputation? Comment below! :D

5 winners will receive: hardcover of REBEL OF THE SANDS, PenguinTeen tote bag, and a Shimmering Hour Glass