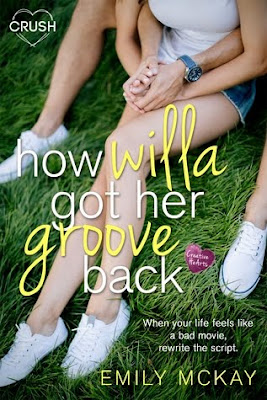 When your life feels like a bad movie, rewrite the script.When Willa Schofer’s father comes home from a business trip with an über-famous new fiancée, Willa’s senior year blows up in paparazzi-fueled flames. Overnight, she has a new house, a new car, and a new soon-to-be stepbrother—the unbelievably hot, unbelievably arrogant, Finn McCain. Thank god he’s constantly pushing her buttons, or she might do something irresponsible. Like fall for the jerk.Just when Willa’s decided to avoid him for, oh, ever, Finn lands in the center of her senior project team. Seriously—how hard is it to shake a guy? At least her work on the project snagged the attention of the (second) hottest guy in school. He might only be into her because of her famous stepmom, and he’s not quite as exciting as a certain annoying housemate, but at least she’s allowed to crush on the guy.Because crushing on your annoying stepbrother? So not cool.
This Entangled Teen Crush book contains an unbelievably hot bad boy, an unbelievably famous actress, and all the drama that comes with adding both to your family. Oh, and a forbidden flirtation with a soon-to-be stepbrother.

I went into this book expecting a romantic comedy, and it actually wasn't quite as romantic as I was expecting! There was some romance, but it definitely wasn't as significant as I thought it would be. This book was really funny though! I thought Willa's commentary was hilarious and very witty. McKay did a great job at weaving humor into this book. I legitimately laughed out loud while reading this book. Even though I thought Willa was really funny, she was kind of over dramatic. I understood what she was going through, but I thought she should have been a little bit more mature about the situation. I think she came to her own conclusions way too quickly. I think she should have talked to her dad about the marriage, and I think she should have been nicer to her dad's fiancee. She didn't even give her a chance! Again, I understood why she was so upset, but I definitely felt like she could have handled the situation much better. At first, I didn't think I would end up liking Finn. He was kind of a jerk! He would act like a douche, but then he would do such nice things! I couldn't help but eventually fall for him. I have a soft spot for bad boys with a good heart!

When it came to the romance, I was really surprised at the lack of it. The book was more about Willa's immature way of dealing with her dad's love life. I think I would have enjoyed this book more if there would have been more of a romantic development between Willa and Finn. I though Willa and Finn had great chemistry, and they would have made such a cute couple! They had some cute moments together, but I would have liked to see even more moments between them. I am hoping to get that in book two.The ending killed me! I couldn't believe McKay ended the book like that. I need answers! I am looking forward to reading the next book to see what happens with Willa and Finn. I am sure it will be a hilarious book! Overall, this was a hilarious book that I did have fun reading even though it was lacking in the romance department. 3 / 5 Fangs*This ebook was given to me in exchange for a honest review. *

Email ThisBlogThis!Share to TwitterShare to FacebookShare to Pinterest
Labels: Review Creative HeArts #2, Emily McKay, How Willa Got Her Groove Back, Release Day, Review