Love Me, Love Me Not
by Alyxandra Harvey 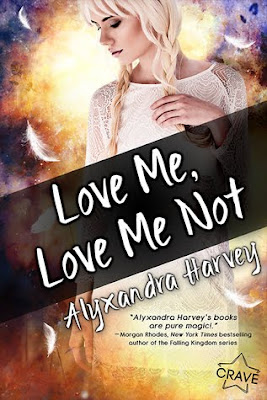 Dating isn’t easy when you’re in the middle of a blood feud.

Anastasia Vila’s family can turn into swans, but just once she’d like them to turn into responsible adults.


After hundreds of years, they still cling to the blood feud with the Renard family. No one remembers how it started in the first place—but foxes and swans just don’t get along.


Vilas can only transform into their swan shape after they have fallen in love for the first time, but between balancing schoolwork, family obligations, and the escalating blood feud, Ana’s got no time for love. The only thing keeping her sane is her best friend, Pierce Kent.


But when Pierce kisses Ana, everything changes.


Is what Pierce feels for her real, or a byproduct of her magic? Can she risk everything for her best friend? And when the family feud spirals out of control, Ana must stop the fight before it takes away everything she loves.


This Entangled Teen Crave book contains language, violence, and lots of kissing. Warning: it might induce strong feelings of undeniable attraction for your best friend.

This book was definitely a fun and quick read. I though Harvey did a great job at taking an old tale and putting her own modern twist on it. I really liked the main character, Ana. I thought she was a strong and caring person. She was a little oblivious when it came to the romance department, but most teenage girls are. I really liked Ana's best friend, Pierce. Pierce was adorable and extremely loyal to Ana. I loved reading from his POV. I really connected to his character due to the fact that he loves to read. There were a lot of other characters in this book, and it was a little overwhelming sometimes. It took me a long time to remember who was who in this book, but I eventually got it down!I thought the plot of this book was a extremely interesting. The book was action packed! I felt like there was always something going on, which was exciting. I thought Harvey did a great job at describing the action scenes and blending in magic to the action. However, the book was a little hard to following in the beginning. I had a hard time getting into the book at first because I couldn't really get a grasp as to what was happening.

However, as the book went on, I felt like things were clarified so everything was easier to understand. I ended up really enjoying the "swan shifter" portion of the book.I thought the romance was really sweet in this book. Pierce and Ana made a really cute couple. I was glad the romance wasn't rushed, even though it was obvious from the beginning that Pierce and Ana were meant for each other! I would love to read more about the adorable romance between Pierce and Ana.Some parts of this book felt a little rushed, and I felt like some chapters ended at weird spots. However, I really enjoyed this book as a whole! The ending was really exciting and it left me feeling happy. I though this was a fun and light read. 3.5 / 5 Fangs*This ebook was given to me in exchange for a honest review. *